Albert Abraham Michelson is known for his research on the speed of light, the invention of the Michelson interferometer, and the famous Michelson-Morley experiment. In light of his various accomplishments, Michelson was awarded a Nobel Prize in Physics, making him the first American to win a Noble Prize in the sciences.

Albert A. Michelson: Fostering an Interest in Optics

Albert Abraham Michelson was born on December 19th, 1852 in Prussia (in an area that is now Poland). When he was two, Michelson moved with his family to the United States, where he spent most of his life.

Michelson grew up in Nevada and California, with the majority of his early education taking place in California. In 1869, he was appointed to the U.S. Naval Academy by President Ulysses S. Grant and spent the next four years as a midshipman. 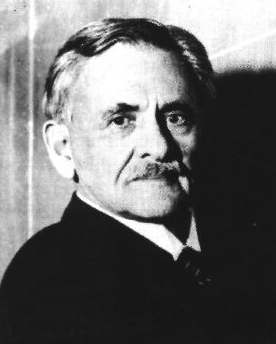 Albert A. Michelson. Image in the public domain, via Wikimedia Commons.

Michelson graduated from the Naval Academy in 1873, returning in 1875 as an instructor of physics and chemistry. He remained in this position until 1879, when he was assigned to the Nautical Almanac Office in Washington, D.C. A year later, Michelson requested a leave of absence to study at prestigious European colleges and universities. One of these was the École Polytechnique, a school that previously hosted André-Marie Ampère and Nicolas Léonard Sadi Carnot.

These trips served to further his scientific curiosity. After his return to the U.S., Michelson resigned from his Navy position and found a job teaching physics at the Case School of Applied Science in Ohio. Teaching suited Michelson, and he later became a professor at Clark University in Massachusetts. Following this, he accepted a position as the head of the physics department at the University of Chicago in 1892. After rejoining the Navy during WWI, Michelson returned to academia and received a Distinguished Service Professorship in Chicago.

Shedding Light on the Speed of Light

Michelson’s results were noticed by Simon Newcomb, another researcher investigating the speed of light. Newcomb invited Michelson to join him in Washington, D.C. and the two worked together until Michelson began his studies abroad. Michelson later resumed his research on the speed of light at the Mount Wilson Observatory in California. 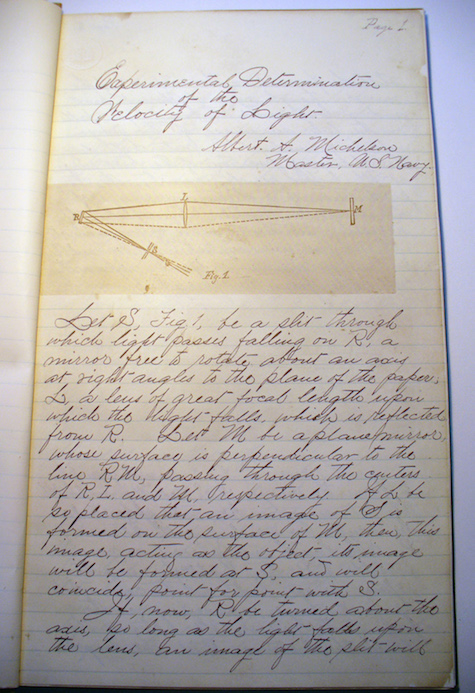 Michelson’s notes on the velocity of light. Image in the public domain, via Wikimedia Commons.

Near the end of his life, Michelson collaborated with two fellow scientists to once again measure the speed of light. Although Michelson died before their measurements were completed, the team recorded a value of 299,774 ± 11 km/s in the mid-1930s. This is quite close to the current accepted measurement for the speed of light, which is about 299,792 km/s.

Another major success in Michelson’s life was the invention of the Michelson interferometer. This device enabled him to precisely measure the velocities and lengths of light waves. Specifically, the Michelson interferometer uses a partially transparent mirror to separate a beam comprised of uniform light waves. The different waves are then routed through various channels before recombining. The resulting phase displacement from covering different distances creates patterns. 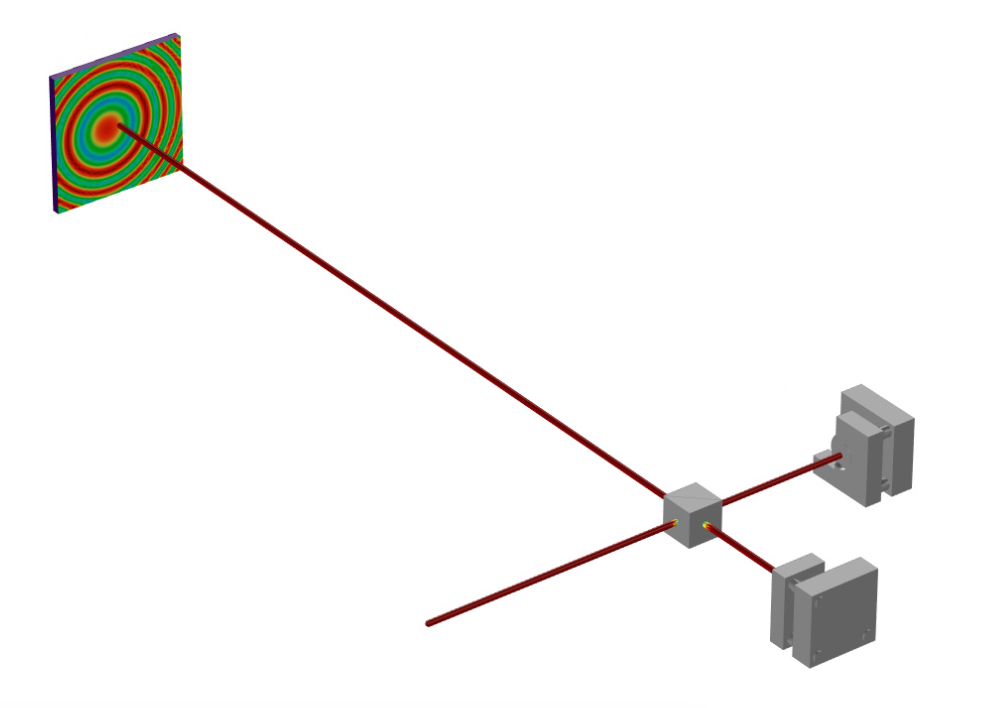 A model of a Michelson interferometer.

Michelson created his device to explore the effect of the earth’s motion on its observed velocity. As such, it was a key instrument in the Michelson-Morley experiment.

A Famous Failure: The Michelson-Morley Experiment

In 1887, Michelson, along with fellow scientist Edward Morley, ran the famous Michelson-Morley experiment. The goal of their experiment was to measure matter’s relative motion through a stationary medium called the luminiferous aether or ether. At this time, many scientists believed that light waves propagated within this medium. 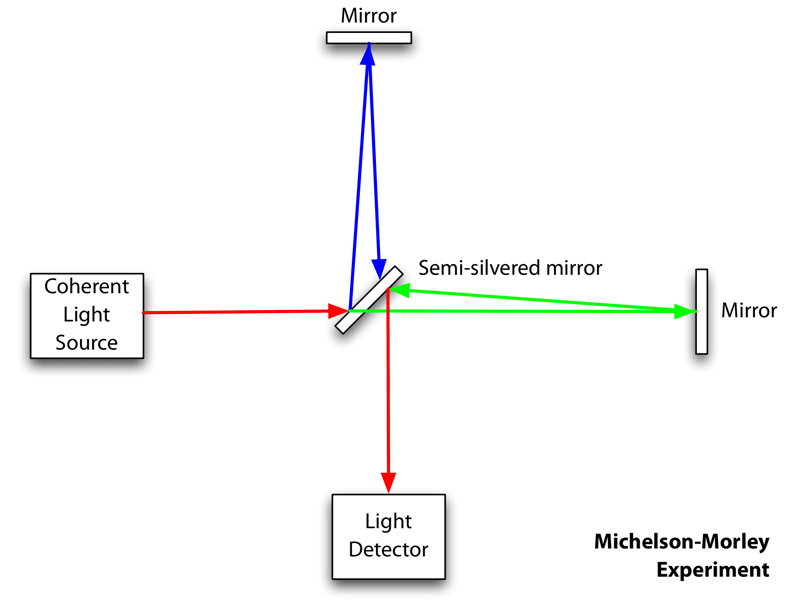 Schematic depiction of the Michelson-Morley experiment. Image by User:Bighead. Licensed under CC BY-SA 3.0, via Wikimedia Commons.

To the scientists’ surprise, the experiment failed to detect the ether and became famous for exactly that reason. Through its null results, the Michelson-Morley experiment provided the first serious evidence against the existence of the ether. Instead, Michelson and Morley found that light’s speed is constant through all inertial systems of reference. Thus, this failure turned out to be a breakthrough in scientific research. 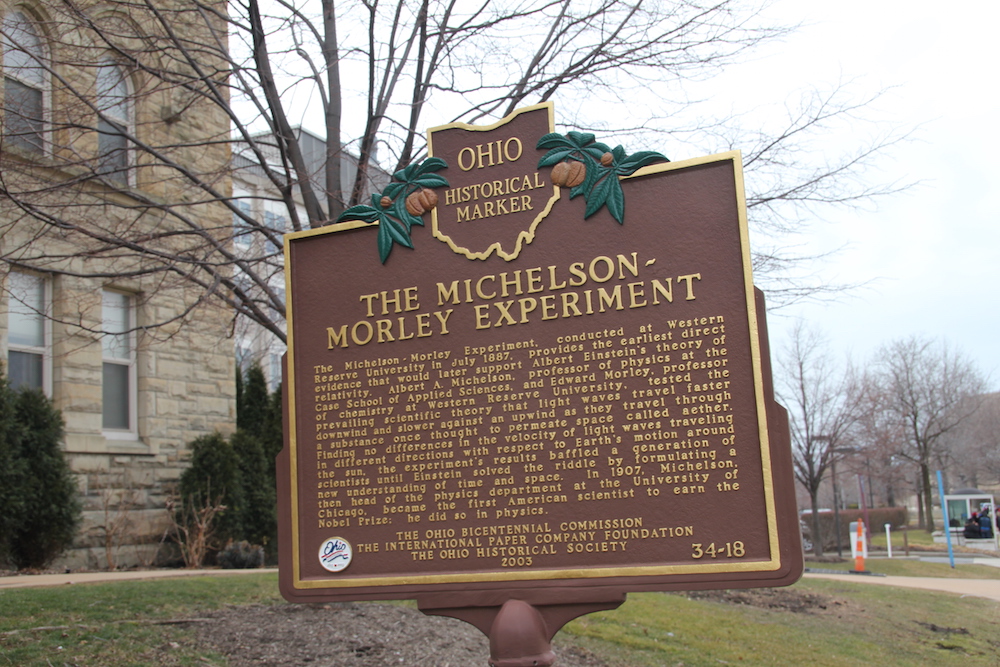 A plaque at the location of the Michelson-Morley experiment. Image by Alan Migdall — Own work. Licensed under CC BY-SA 3.0, via Wikimedia Commons.

It was due to experiments such as the Michelson-Morley experiment, which relied on optical precision instruments like the interferometer, that Michelson won a Nobel Prize in Physics in 1907.

Looking to the Stars with Interferometry

Later in life, Michelson became more interested in astronomy, another subject he studied at the Mount Wilson Observatory. Using a developed version of his earlier interferometer, Michelson measured the diameter of the star Betelgeuse in 1920. With this, he became the first person to accurately measure the diameter of a distant star besides the sun. 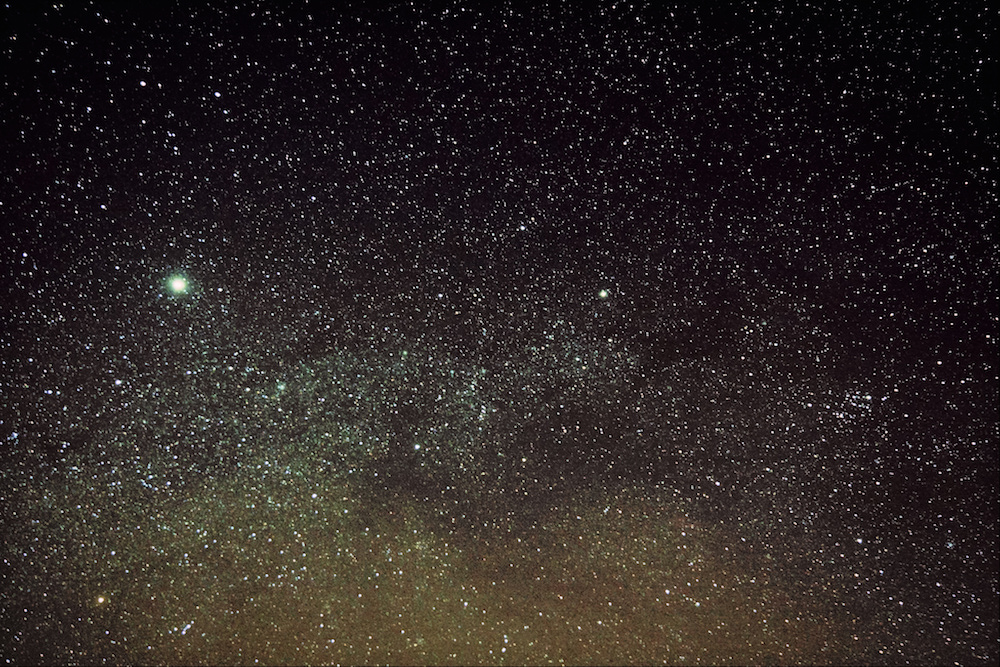 Stars in the night sky. Betelgeuse is the bright star in the lower-left corner. Image by sagesolar. Licensed under CC BY 2.0, via Flickr Creative Commons.

Michelson passed away on May 9th, 1931, but his contributions to science remain important today. His passion for measuring the speed of light, invention of the Michelson interferometer, and work on the Michelson-Morley experiment helped shape the way we think about light. Michelson also received numerous awards both nationally and internationally, including the Matteucci Medal; Copley Medal; Franklin Medal; Gold Medal of the Royal Astronomical Society; and, of course, the Nobel Prize.

In light of these accomplishments, let’s all wish Albert A. Michelson a happy birthday!

Find Out More About Light-Based Research