Analyzing the Design of a Thermoelectric Device for Cryotherapy

Cryogenic techniques are used to treat a wide range of cosmetic dermatological problems as well as remove internal tumors and other damaged tissue. Shifting from the typical nitrogen-based approach, researchers at the University of Birmingham in the U.K. sought to investigate the potential of using a thermoelectric cooler, or Peltier device, to cool a cryogenic probe. Here’s a look at how COMSOL Multiphysics provided them with the tools to do so.

As a reader of the COMSOL Blog, you may remember a previous post where we discussed a form of treatment for damaged biological tissue: cryotherapy. The treatment itself, which is valued for both its efficiency and lack of side effects, involves freezing damaged tissues, which causes them to then thaw and fall off. 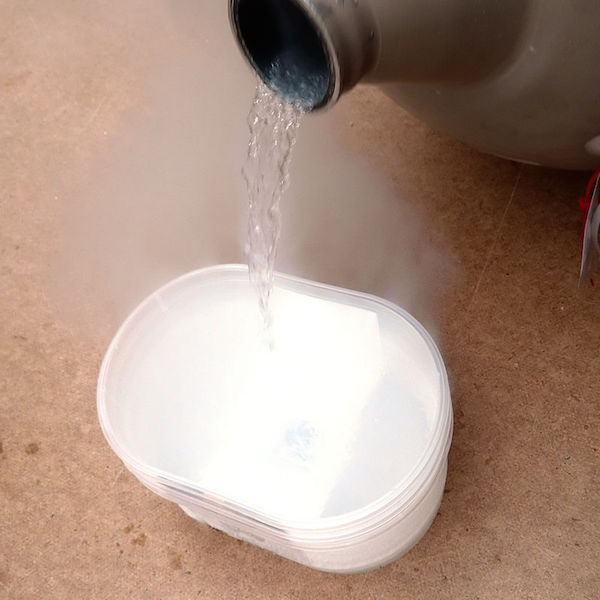 Liquid nitrogen is often used as a freezing agent for cryotherapy. Image by Cory Doctorow. Licensed by CC BY-SA 2.0, via Wikimedia Commons.

While liquid nitrogen is the most typical freezing agent used in cryotherapy, alternative approaches to cooling a cryosurgical probe have emerged — ones that could remove the need for cryogenic liquid as a cooler and result in compact, lightweight probe designs. One specific approach is the use of thermoelectric devices.

Operating on the principle of the thermoelectric effect, thermoelectric coolers, or Peltier devices, produce a temperature difference at a junction of two different conducting materials. Depending on the direction of the current, the device will transfer heat from one end to the other. In other words, as one side of the device becomes cooler, the other side becomes hotter. The applications of Peltier devices, the design of which varies according to its use, ranges from the cooling of electronics to the refrigeration and air conditioning industry. Schematic of a Peltier device.

When it comes to cryotherapy, a probe design based on a Peltier device offers many potential advantages over nitrogen-based cryogenic probes. One advantage is that it eliminates the extra parts and safety precautions that accompany maintaining a pressurized gas. Such a design could also be more responsive and reliable, lending flexibility to medical professionals who anticipate using it for a range of medical procedures.

Let’s see how the team at the University of Birmingham in the U.K. used simulation to investigate the potential of such a device for cryotherapy and how to optimize its design.

The Peltier device used in this analysis was comprised of several Bismuth Telluride semiconductors, connected with copper layer, that were sandwiched between aluminum plates. To define heat throughout the Peltier device, the researchers used the Heat Transfer in Solids physics interface. Applying the Electric Currents physics interface, meanwhile, enabled the calculation of the electric field, current, and potential distribution. In order to couple the electrical and thermal behavior of the model, they used the Thermoelectric Effect multiphysics node — a powerful tool for analyzing and optimizing Peltier devices.

The research study began with the simulation of a single-stage Peltier device. This initial analysis involved subjecting the device to its maximum applied current and voltage, 12 A and 15.2 V, respectively. As the plot below illustrates, the maximum temperature difference achieved was less than 70 K. Therefore, the single-stage design could not generate a low enough temperature, from 295 K, required to freeze tissue (203 K). 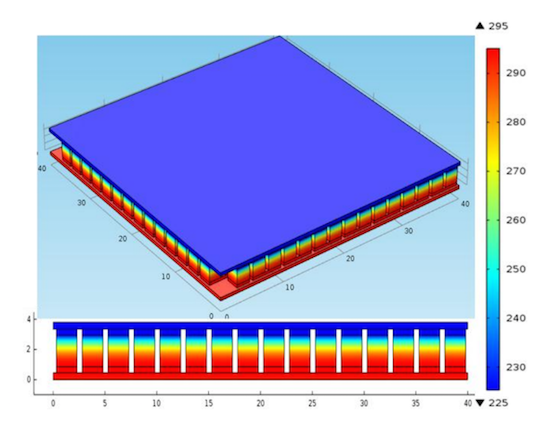 To achieve the desired temperature for cooling, the researchers turned their attention to testing multistage Peltier devices. You may wonder why using a single-stage design with a higher current intensity isn’t an option. The reason for this is that increasing the current density induces greater Joule heating and, at some point, the Peltier effect becomes dominated by the Joule heating. Multistage device configurations serve as a way to avoid to such an increased current (i.e., Joule heating).

In this case, adding secondary and tertiary layers of Peltier components increased the temperature difference between the upper and lower ceramic plates. While the temperature for the two-stage design did not generate a temperature low enough for cryotherapy, the three-stage design was able to produce a very low temperature, around 210 K. While slightly greater than the freezing temperature of 203 K, these findings indicate that adding multiple stages to a Peltier device produces lower temperatures. This can serve as a foundation for the development of future designs to be used for cryotherapy.

The results from these studies verify the potential of generating freezing temperatures for cryotherapy with Peltier devices. Such research paves the way for advancements in the medical field, fostering the development of a safer and more reliable approach to treating damaged tissue.