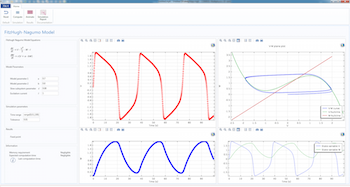 Understand the Dynamics of the FitzHugh-Nagumo Model with an App

In 1961, R. Fitzhugh (Ref. 1) and J. Nagumo proposed a model for emulating the current signal observed in a living organism’s excitable cells. This became known as the FitzHugh-Nagumo (FN) model of mathematical neuroscience and is a simpler version of the Hodgkin-Huxley (HH) model (Ref. 2), which demonstrates the spiking currents in neurons. In today’s blog post, we’ll examine the dynamics of the FN model by building an interactive app in the COMSOL Multiphysics® software.

In a previous blog post, we discussed integration methods in time and space, touching on how to compute antiderivatives using integration coupling operators. Today, we’ll expand on that idea and show you how to analyze spatial integrals over variable limits, whether they are prescribed explicitly or defined implicitly. The technique that we will describe can be helpful for analyzing results as well as for solving integral and integro-differential equations in the COMSOL Multiphysics® software. 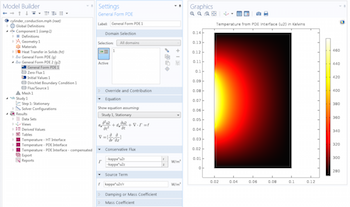 Cylindrical coordinates are useful for efficiently solving and postprocessing rotationally symmetric problems. The COMSOL Multiphysics® software has built-in support for cylindrical coordinates in the axisymmetry physics interfaces. When defining custom partial differential equations (PDEs) using the mathematical interfaces, paying close attention to their meaning is important. The PDE interfaces assume partial differentiation in a Cartesian system, requiring manual coordinate transformations to change to a cylindrical system. See how to account for such coordinate transformations when using your own PDEs. 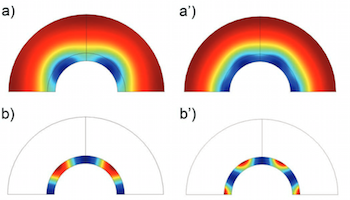 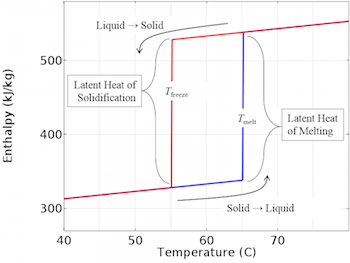 Thermal curing is the process of temperature-induced chemical change in a material, such as the polymerization of a thermoset resin. This process is relevant, for example, when a precursor resin is heated and hardens during the manufacturing of composites. You can often assume that the material does not flow during curing, which simplifies the analysis. Thermal curing is very easy to model within the core functionality of COMSOL Multiphysics, as we will show in this blog post. 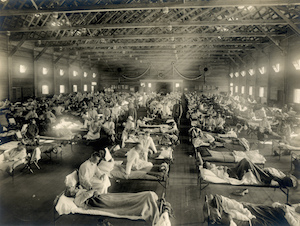 Analyze the Spread of Epidemic Diseases with Simulation

Surely you remember the last time you were stuck in bed with the flu. Influenza, commonly known as the flu, can be at the very least an unpleasant experience, but it also claims a lot of casualties every year. Today, public health officials use mathematical modeling techniques to study the flu and other infectious diseases to predict their spread and make informed decisions about public health.

Verify Simulations with the Method of Manufactured Solutions

How do we check if a simulation tool works correctly? One approach is the Method of Manufactured Solutions. The process involves assuming a solution, obtaining source terms and other auxiliary conditions consistent with the assumption, solving the problem with those conditions as inputs to the simulation tool, and comparing the results with the assumed solution. The method is easy to use and very versatile. For example, researchers at Sandia National Laboratories have used it with several in-house codes.