Celebrating the Life of Robert Hooke

Robert Hooke was a Renaissance man with interests including mechanics, timekeeping, biology, art, and architecture. He led an accomplished life and is known for his work in many diverse fields, as well as for writing a popular book on microscopy, Micrographia. Let’s take a step into the past to explore Robert Hooke’s life and achievements.

Robert Hooke: A Student of Mechanics, Art, and More

In July of 1635, Robert Hooke was born on the Isle of Wight. The youngest of four children, he grew up with an inquisitive mind and developed an early interest in drawing and the mechanical workings of objects, such as clocks. Possibly because of his poor health, Hooke’s education took place partly at home by his father, a curate for the local church. 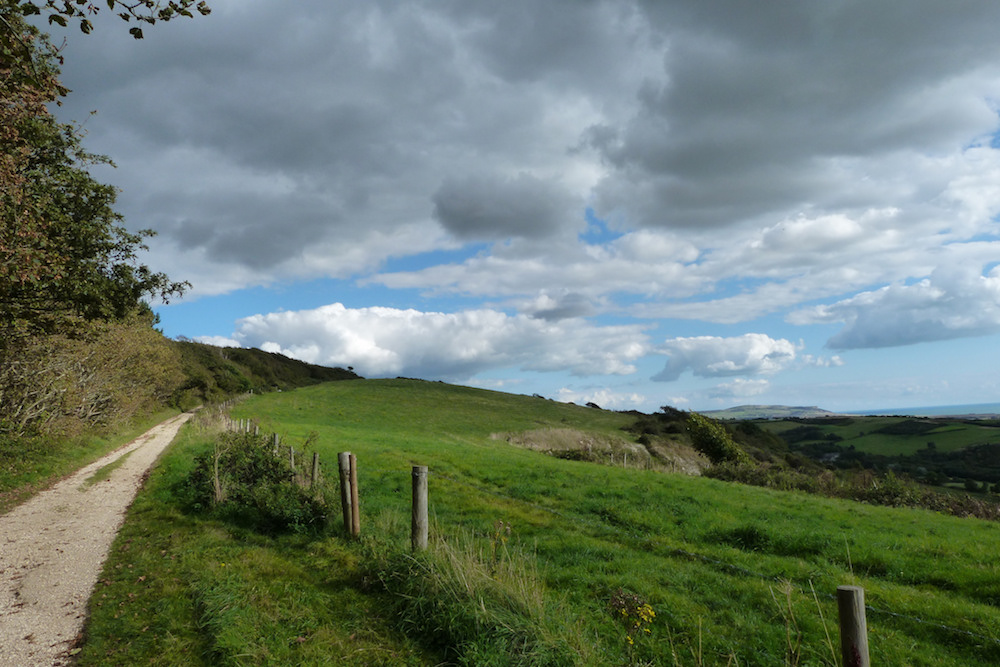 The Isle of Wight, the birthplace of Robert Hooke. Image by Gordon Joly — Own work. Licensed under CC BY-SA 2.0, via Flickr Creative Commons.

Upon his father’s death in 1648, Hooke left home with a small sum of money for an apprenticeship with a portrait painter in London. He spent a short period at this apprenticeship before entering the Westminster School in London. There, he studied languages, Euclid’s Elements, and music in addition to continuing his education in mechanics.

In his late teens, Hooke further expanded his education by enrolling at Christ Church, Oxford. He met some of the influential thinkers of the day, including the architect Christopher Wren. During this time, Hooke served as an assistant to Robert Boyle and the two worked together on Boyle’s air pump.

In 1662, the newly founded Royal Society of London appointed Hooke as its curator of experiments. In this role, he performed experiments at the society’s weekly meetings. Doing so exposed Hooke to the latest scientific ideas and motivated him to come up with new ideas of his own.

Hooke also took on a professorship position at Gresham College in 1665, which provided him with a residence at the college.

A Glimpse of Hooke’s Major Accomplishments

Robert Hooke made contributions to a wide range of fields. In 1660, before he was appointed to his position at the Royal Society, Hooke developed his theory of elasticity called Hooke’s law. This law has since been used for many practical applications, such as timekeeping devices — one of Hooke’ longtime interests. Hooke also designed balance springs that helped advance portable timekeeping devices (watches).

A few years later, in 1665, Hooke published his most well-known work, Micrographia. For this book, Hooke built his own microscope to closely observe subjects of the natural world, such as cork and fleas. He then created detailed illustrations of his observations. These larger-than-life images provided readers with the ability to see tiny subjects in more detail than they ever could. 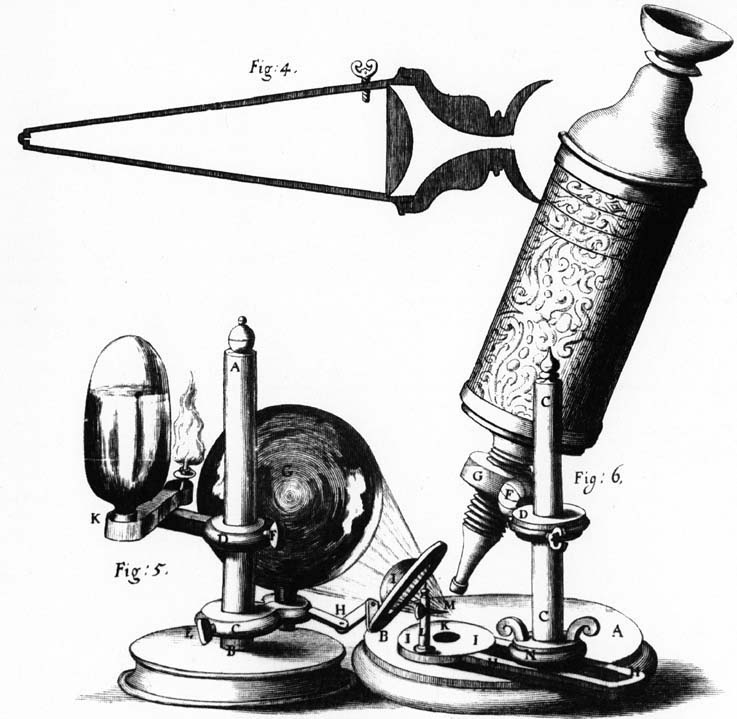 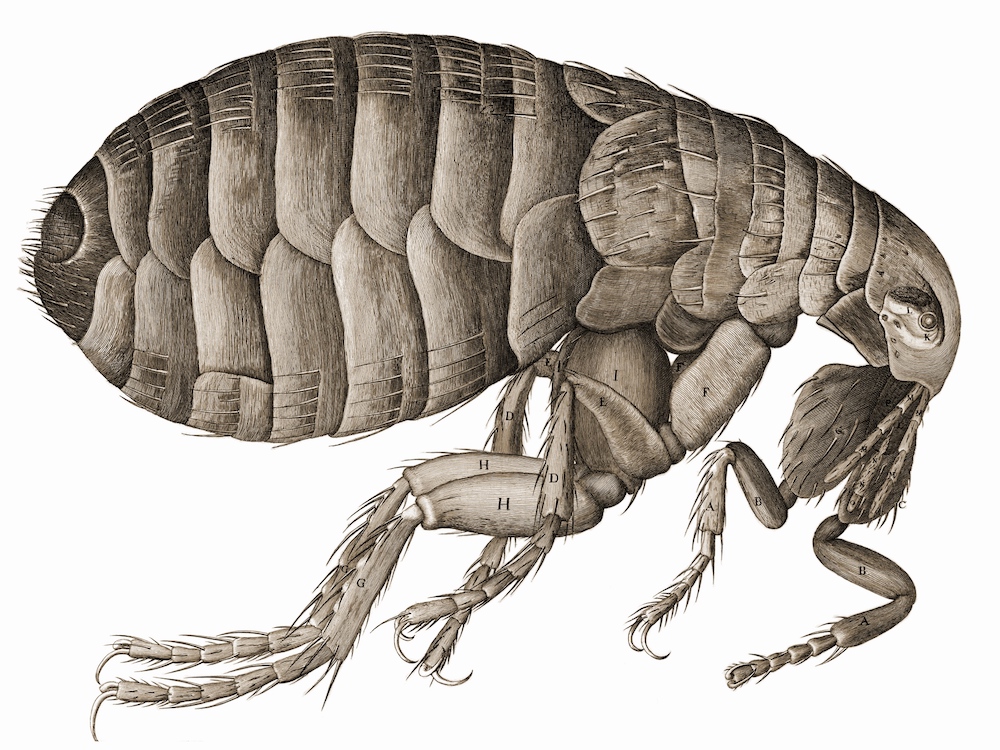 Within the pages of Micrographia, Hooke made many keen observations. For instance, he coined the term cells by noting how the cell walls in cork tissue resemble the individual rooms of a monastery and the cells of a honeycomb. The book touches on the structure of snowflakes and fossils as well; The latter of which caused Hooke to believe that some of the fossilized objects he studied were the remains of living things soaked in mineral-rich petrifying water. 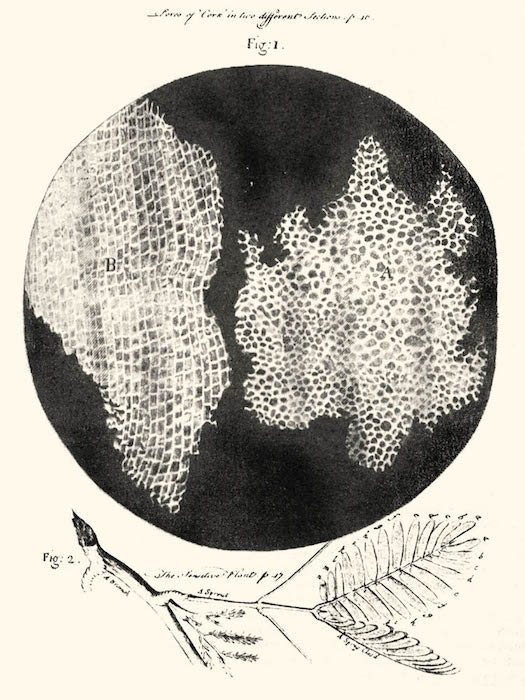 Cells, as drawn by Hooke in Micrographia. Image in the public domain, via Wikimedia Commons.

After the Great Fire of London in 1666, Hooke’s attention switched from microscopic plants, animals, and objects to city buildings. Working with Christopher Wren, Hooke assisted in rebuilding London and designing a monument to the fire. This wasn’t Hooke’s only venture into architecture: During his lifetime, he designed the Royal College of Physicians among other buildings. 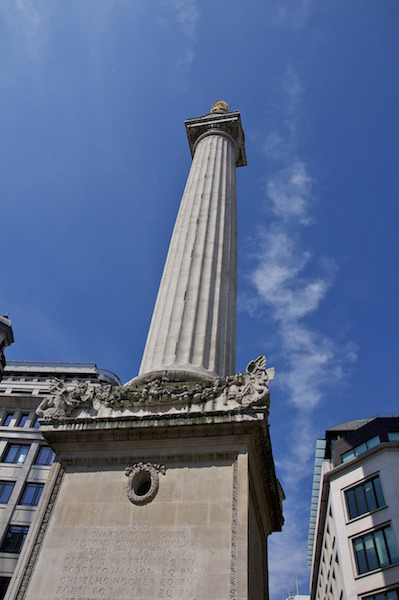 The monument to the Great Fire of London that Hooke helped design. Image by Martin Pettitt — Own work. Licensed under CC BY 2.0, via Flickr Creative Commons.

Hooke used his interest in astronomy to make new observations about Jupiter, Mars, and the moon. His other studies included topics such as combustion, light, gravity, the properties of the catenary curve, and the invention of a universal joint.

After a lifetime of delving into many different subjects, Hooke passed away in March 1703. Original portraits of Hooke have since been lost, but his extensive work left behind a lasting legacy that remains with us today. 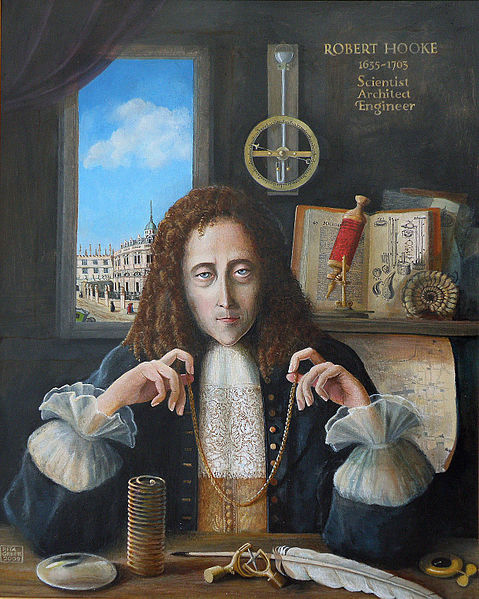 A portrait of Robert Hooke based on descriptions of his appearance. Image by Rita Greer. Licensed under Free Art License 1.3, via Wikimedia Commons.

Read More About Robert Hooke and Other Influential Scientists