December of 1903 marked the commencement of the Age of Powered Flight, and the Wright brothers went down in history. This was a time before personal computers and simulation software existed. Determining the optimal design of their airplane had to be done using physical prototypes and real-life experiments. What had the design looked like if the Wright brothers had been able to use computers and modeling software? Three researchers from Pennsylvania State University sought to find out how the design may have differed if they had used multiphysics software.

The Wright brothers and their First Flyer are history. December 17th was an extraordinary day for the advances of aviation, when the two brothers made four successful flights in Kitty Hawk, NC. There is no questioning that their design was good enough to bring the structure into the air. What if they could have used multiphysics software to determine the ideal design, instead of settling for “good enough”? This question is answered in a paper that was presented at our conference in Boston earlier this year, titled “A Computational Approach for Optimizing the First Flyer with COMSOL”.

The research conducted by Abdul Aziz, Hoofar Pourzand, and Anand Singh involved determining how to reduce the weight of the airplane and thereby improve the efficiency of the flight. They figured that by structurally altering the airplane, the flying time could be decreased. Of course, it would need to be done in a way that did not compromise the flying ability of the airplane. So how could the design be modified? After modeling the flyer using SolidWorks® and then importing the model into COMSOL via our LiveLink™ for SolidWorks®, a series of analyses could be made. By using COMSOL Multiphysics and the Structural Mechanics Module they were able to remove four of the sixteen vertical bars connecting the upper and lower wings. 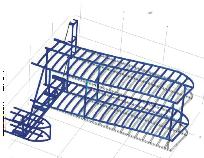 Then, they used the CFD Module to calculate the aerodynamics forces involved. In doing so, they were able to determine the duration of the flight and distance traveled based on the flight conditions for that day in December, and the pressure distribution and velocity profile on the wings.

If you missed their presentation in Boston, you can see how the three researchers executed the experiment and what their full findings were by downloading their paper.