Biofuels are recognized as a valued source of renewable energy, with applications ranging from heating buildings to powering transportation. Increasing the availability of these fuels requires an understanding of the processes behind biomass conversion. With the help of COMSOL Multiphysics® simulation software, researchers at NREL are seeking to optimize such processes, making biofuel conversion more efficient and cost-effective.

Fossil fuels are at the core of our industrial society, helping to generate steam and electricity as well as power modes of transportation. As the industry continues to grow and the demands for energy increase, concern for depleting these nonrenewable energy sources as well as their impact on the environment also increases. In an effort to conserve such resources and mitigate the negative environmental effects associated with their mass consumption, many industries are looking to renewable energies, like biofuels, as a viable alternative.

Most recognized for their use as transportation fuel, biofuels are a renewable source of hydrocarbon liquid fuel produced mainly from plant materials, also referred to as biomass. Second generation biofuels circumvent the “food-vs-fuel” dilemma, as they are produced from agricultural waste and excess forest residues. Using a biomass source is particularly advantageous because it is a carbon-neutral process that reduces greenhouse gas emissions. However, due to the costs associated with the production process itself, renewable biofuels have yet to become economically competitive with fossil fuels.

Before optimizing biofuel production, Peter Ciesielski and fellow researchers at NREL knew that they would first need to obtain a better fundamental understanding of the dynamics behind the conversion processes. For that, they turned to COMSOL Multiphysics.

Pyrolysis is a thermochemical process that breaks down biomass through exposure to high temperatures in the absence of oxygen. During this process, the biomass is vaporized to form a mixture of compounds, called bio-oil, as well as additional gaseous products and char. With further refinement of the bio-oil, hydrocarbon biofuels are produced. 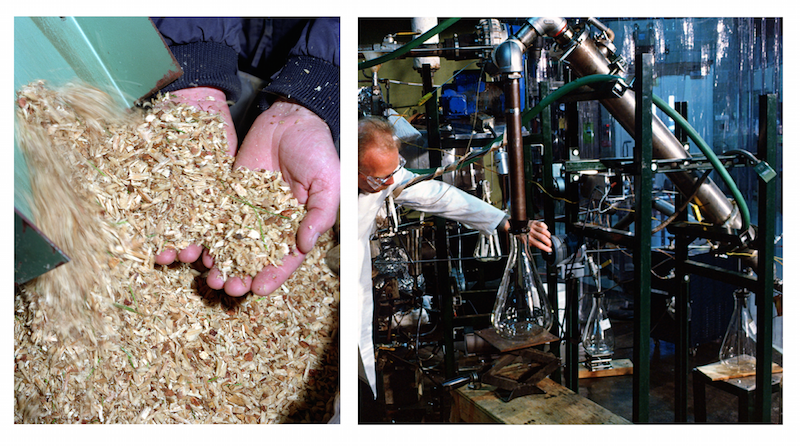 Fast pyrolysis takes things one step further. Often used for woody biomass, this thermochemical conversion route utilizes an extremely high heat transfer rate to decompose the biomass, with internal temperatures reaching upwards of 500ºC in a second. In this process, ensuring efficient heat and mass transfer is key, as this helps to minimize char formation and speed up favorable reactions. 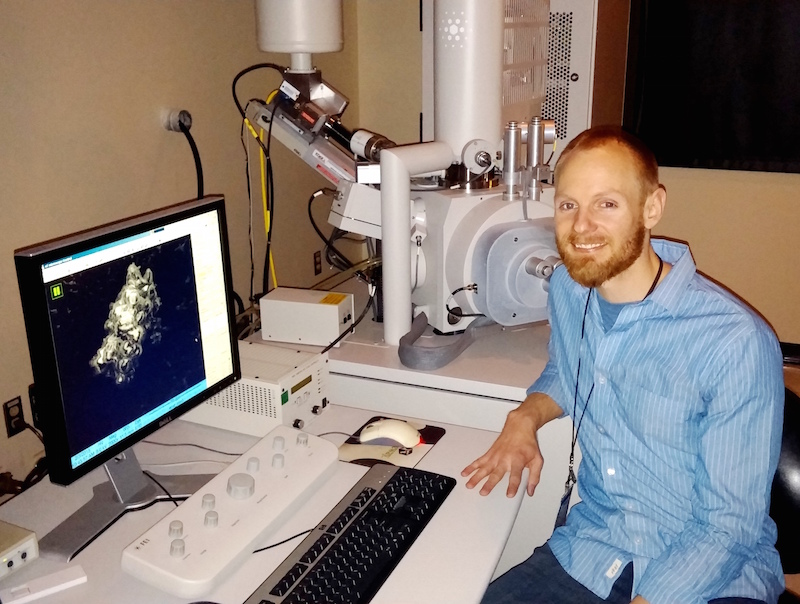 Peter Ciesielski of NREL acquires images of wood biomass for his research of fast pyrolysis.

When Ciesielski and his colleagues first began developing their model of biomass, they made it a point to take internal microstructure into account — an element that had been ignored in previous research. “Since COMSOL® has geometry tools, physics, meshing, and solvers already implemented, we can spend more time making the biomass model geometry really accurate,” Ciesielski stated in a COMSOL News 2015 article.

A close-up of the biomass particle model.

With their structurally accurate model in place, the team set out to simulate heat and mass transfer within fast pyrolysis. In this process, the breakdown of biomass begins with the application of very high temperatures — about 500°C — to an oxygen-free reaction vessel for a couple of seconds. After implementing these conditions, the researchers used the Conjugate Heat Transfer interface to simulate heat transfer between the outer fluid domain, comprised of nitrogen gas, and the biomass particle. Through this analysis, they could identify how long it would take for a particle of a given size, shape, and structure to reach optimal decomposition temperatures.

Additional simulations were performed to evaluate the diffusion of sulfuric acid, a chemical used to pretreat biomass before its conversion into biofuel. Using the Transport of Diluted Species interface, the researchers ran transient simulations of mass transport in the microstructure and solid particle geometries. The findings from both of the studies suggested that a detailed or microstructured model is useful in evaluating and optimizing biofuel conversion processes, as a simplified solid model may not adequately capture differences between biomass feedstocks.

Looking to further understand and improve biofuel production via fast pyrolysis, Ciesielski and his colleagues are planning to analyze rapid phase transitions and chemical reactions in future simulations. After obtaining a basic understanding of transport in biomass, the team hopes to run effective correlations with low-order models for a variety of process parameters and biomass feedstocks. These results can be used to optimize the performance of large-scale reactors designed to produce industrial quantities of biofuel.

What’s more, the research team at NREL was eager to discover that their biomass model is general enough to apply to any process that takes biomass as a feedstock. As such, the model provides an accurate foundation for modeling a variety of conversion processes and enhancing their efficiency. This has opened a lot doors, paving the way for future advancements in biofuel development.