Extraordinary optical transmission (EOT) is an important process in terahertz applications. Developing EOT applications could lead to improvements in medical imaging, quality assurance, and more. To study this phenomenon, researchers simulated EOT devices with different array geometries and material properties. The simulation results were compared and validated with measured data. Let’s take a look at their work…

The use of terahertz (THz) radiation shows promise in a variety of fields. For example, THz rays could be used for certain types of medical imaging, such as for skin cancer and tooth decay. The approach is noninvasive and safer than X-rays, since THz rays are nonionizing. Other application areas include security screening, photonic integrated circuits, and quality assurance. Before these applications can be developed, it’s important to learn more about how materials transfer light in the THz region. 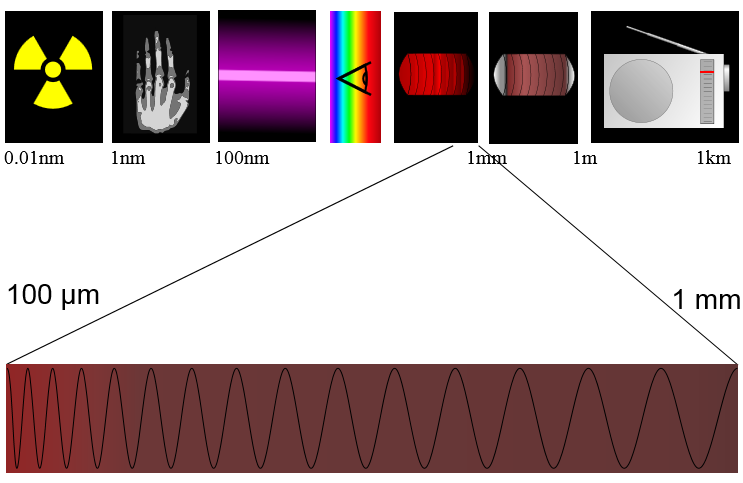 One way to transmit light in the terahertz region is extraordinary optical transmission, which occurs when light is incident on a subwavelength periodic array of apertures (or openings). THz waves must be at a resonance frequency, which depends on the array geometry of the EOT device and material properties of the metal-dielectric interface. EOT begins when a wave hits this interface and excites the surface plasmon polaritons (SPPs). The SPPs then decouple into free space before recoupling at the edges of the openings. This process moves light through a device, but the transmittance is usually poor.

To optimize the transmittance of an EOT device, we can use simulation to study the array geometry and material properties, which both play a critical role in how well the light is transmitted. Simulating EOT can also help characterize how materials behave in the THz region. For these reasons, researchers from Wright State University studied EOT using the COMSOL Multiphysics® software and add-on RF Module.

The researchers’ model consists of an air-filled waveguide with an electromagnetic plane wave propagating through it at THz frequencies. A combination of perfect electric conductors (PECs) and perfect magnetic conductors (PMCs) are used to simulate the excitation of an infinite plane wave on an infinite periodic array. The model also includes a port that determines the resonance frequency of the plane wave. 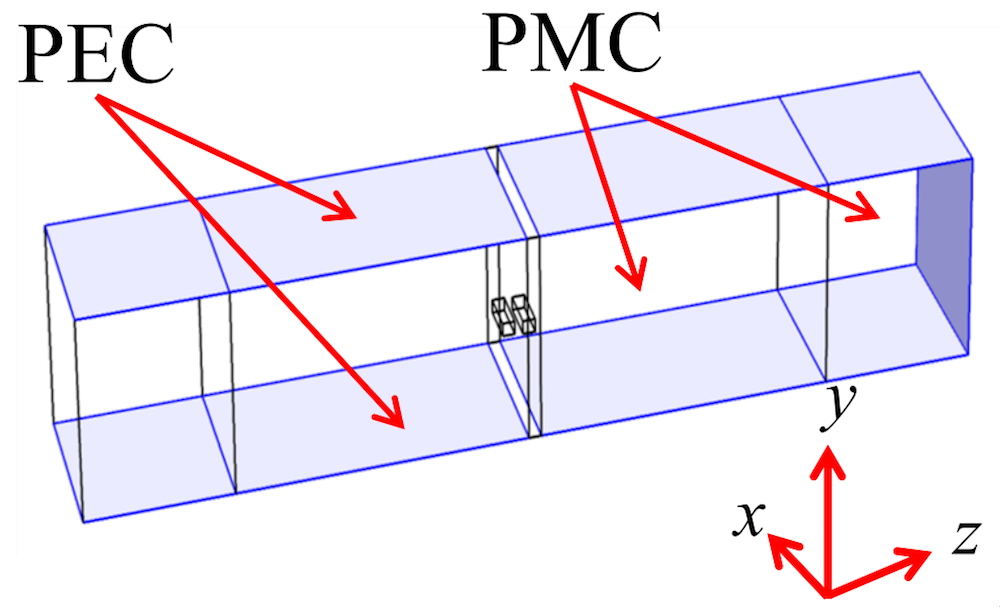 The PECs and PMCs in the model geometry. Image courtesy S. Almousa and J.A. Deibel and taken from their COMSOL Conference 2016 presentation.

The modeled EOT device tests two types of materials with different geometries: carbon and carbon nanotube (CNT). To define the material properties of the carbon, the researchers used the built-in Material Library in COMSOL Multiphysics. For the CNT, they based the electrical properties on experimental measurements and described the conductivity via the Drude model. 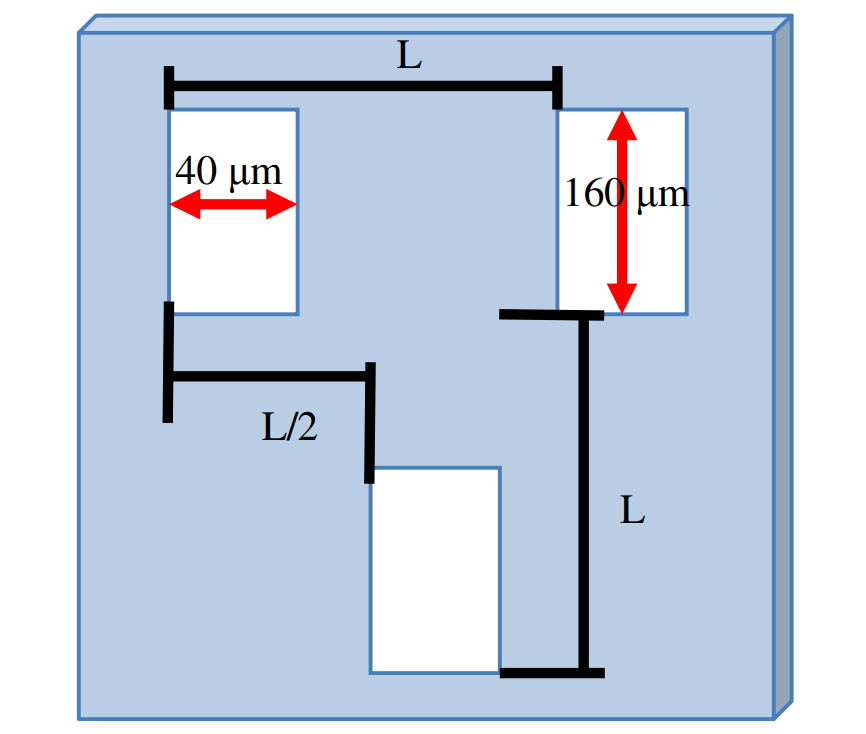 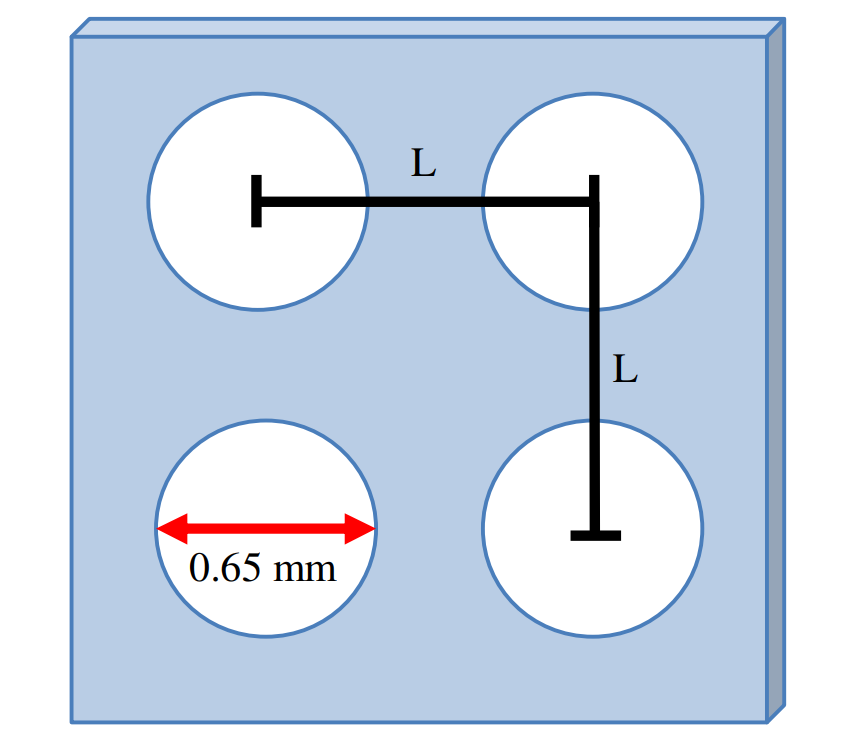 For the copper device, the simulation results and measured data show good agreement in terms of Wood’s anomaly and resonance frequency. Note that in both cases, the wavelength of the resonance frequency is slightly longer than that of theoretical calculations. In addition, the results show surface waves on thin-film surfaces, meaning that there was propagation of SPPs. This is considered the prime reason of extraordinary optical transmission. 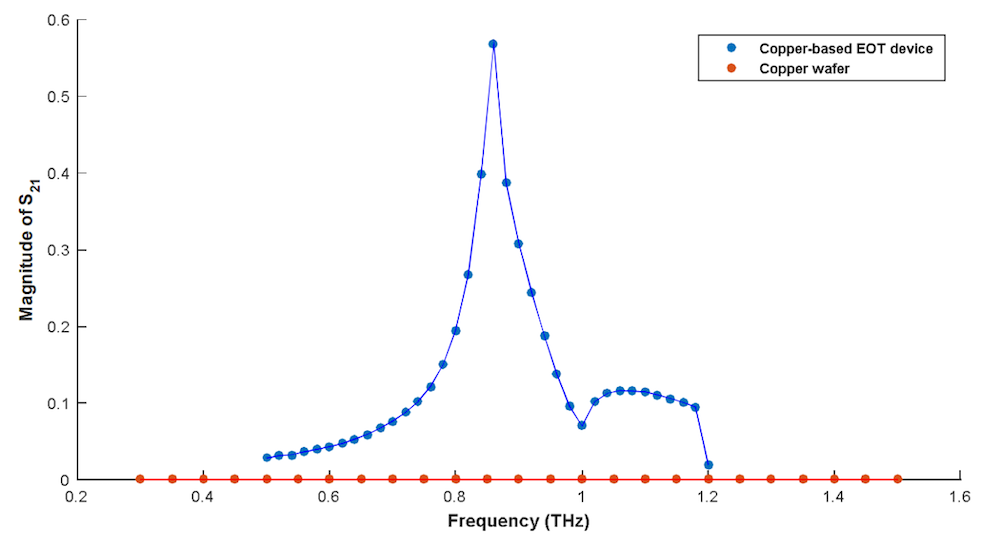 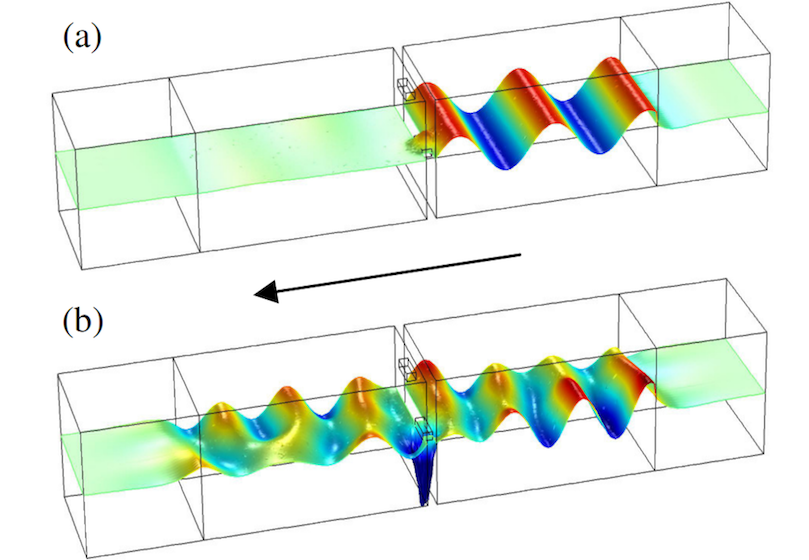 The simulation results show a resonance frequency of 0.86 THz for the copper-based device (left) and the wave moving from right to left through the EOT device with copper at 0.6 THz (top-right) and 0.86 THz (bottom-right). Images courtesy S. Almousa and J.A. Deibel and taken from their COMSOL Conference 2016 Boston paper.

Next, let’s take a look at the results for the carbon nanotube device. The simulation again shows good agreement with measurements in terms of resonance frequency, but Wood’s anomaly appears only in the simulation. To improve the accuracy of the model going forward, the researchers could describe the conductivity of CNT with the Drude-Lorentz model rather than the simpler Drude model. As seen in the image below and to the right, the results for the CNT-based device also show the coupling and decoupling of the electric field. 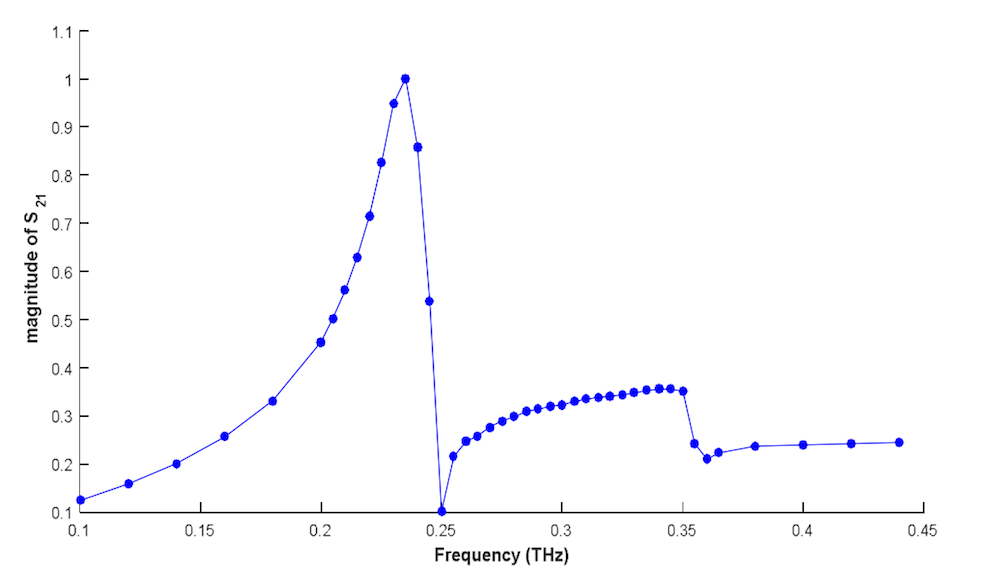 The simulation results show the resonance frequency to be 0.235 THz for the CNT-based device (left), and the coupling and propagation of the transmitted wave through the CNT-based device at 0.235 (center) and 0.1 (right) THz. Images courtesy S. Almousa and J.A. Deibel and taken from their COMSOL Conference 2016 Boston paper.

By validating their results with measured data, the researchers showed that simulation is an accurate way to study devices with extraordinary optical transmission. They plan to use simulation to determine whether EOT can characterize the electromagnetic properties of a conductive thin film, thus further developing applications in the THz region.

i want to know how he used drude lorentz model

Hi,
Is it possible to get the model file for this simulation? Appreciate