The MTC Builds a Simulation App to Optimize 3D Printing

Apps Advance the Power of Simulation

Designers and manufacturers are usually interested in testing various design schemes to create the most optimized device or process. As a simulation expert, you will often find yourself running multiple tests to account for each new design. The Application Builder, however, has revolutionized this process. By turning your model into a simulation app, you can enable those without a background in simulation to run their own tests and obtain results with the click of a button.

When designing an app, you can opt to include only those parameters that are important to your end-user’s particular analysis, hiding the model’s complexity while still including all of the underlying physics. As modifications are made to the design, app users can change specific inputs to simulate the performance of the new configurations. The result: A more efficient simulation process that allows engineers to focus on the design outcome rather than the physics behind the model.

Over the past few weeks, we’ve blogged about several of our own demo apps that are designed to help you get started with making apps. Today, we will share with you how a team at the MTC built their own app to analyze and optimize shaped metal deposition (SMD), an additive manufacturing (3D printing) technique. Let’s begin by exploring what prompted the development of this app. 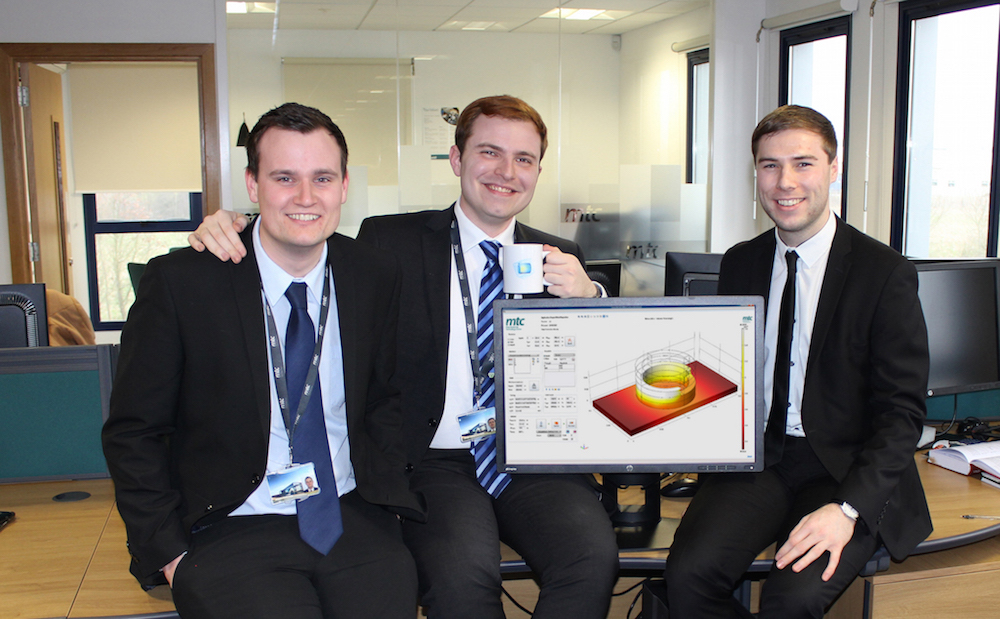 The MTC team behind the creation of the simulation app.

A Growing Interest in 3D Printing

The 3D printing industry has experienced tremendous growth within the last several years. As new initiatives have further developed the technology, 3D printing has emerged as a favorable method of manufacturing components for medical devices, automobiles, and apparel, to name a few.

At the MTC — which has recently become home to the UK National Centre for Net Shape and Additive Manufacturing — simulation engineers recognized their customers’ interest in additive manufacturing, with particular regards to shaped metal deposition. In contrast to powder-based additive manufacturing techniques, SMD is valued for its capability to build new features on pre-existing components as well as use a number of materials on the same part.

Similar to welding, this manufacturing technology deposits a mass of molten metal that is applied gradually on a surface. A cause for concern within this process is that the thermal expansion of the molten metal can deform the cladding as it cools. Thus, the final product can differ from the expected result.

A simulation of temperature heating in the manufactured part, created by the MTC team. 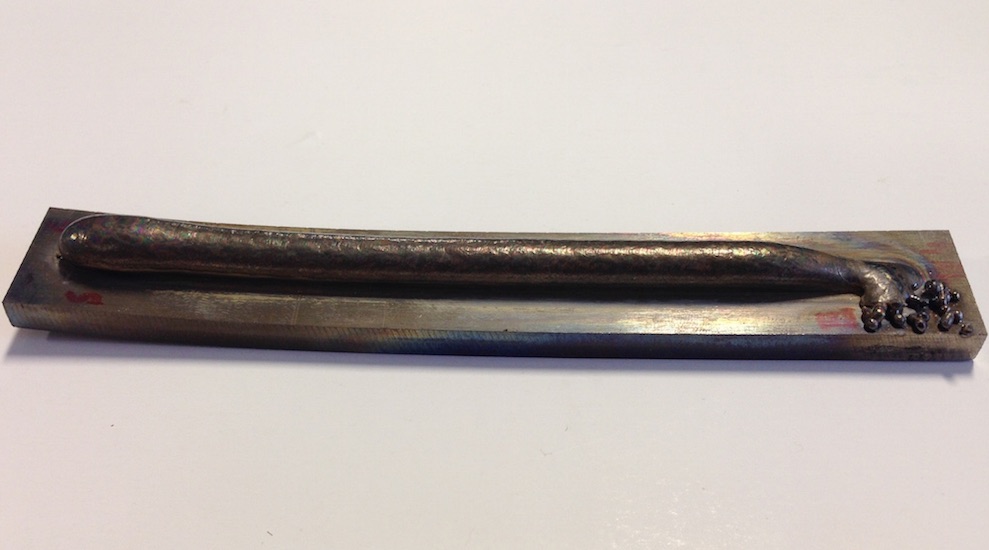 Visible deformation on the manufactured part after six deposited layers.

Using COMSOL Multiphysics, a team at the MTC created a model to better predict the outcome of the design by minimizing deformations or changing the design to account for such deformations. Responding to the growing popularity of this manufacturing technique, the MTC turned their model into a simulation app that could be shared across various departments within their organization.

The simulation app built by the MTC is based on a thermomechanical analysis of thermal stresses and deformation resulting from SMD thermal cycles. The app was designed to predict if the deposition process would create parts that fell within a specific range of tolerances. In some cases, this could require many tests to be run before arriving at an acceptable final deformation. With the app’s intuitive and user-friendly interface, app users are able to easily modify various inputs to test out each new design and analyze its performance. 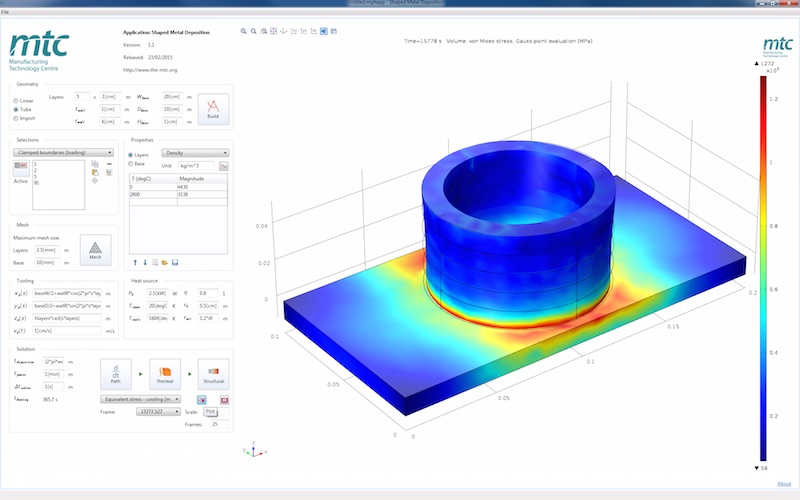 Within the app, the MTC team has given users the ability to easily test out different geometries, change materials, apply meshing sequences, and experiment with various heat sources and deposition paths. The app also includes two predefined parametric geometries, as well as the option to import a custom geometry.

Running a simulation using the app. This plot represents the temperature field.

In COMSOL News 2015, Borja Lazaro Toralles, an engineer at the MTC, discussed the advantages of taking this approach to analyzing and optimizing SMD. “Were it not for the app, our simulation experts would have to test out each project we wanted to explore, something that would decrease the availability of skilled resources,” Lazaro Toralles noted in the article.

Since its development, the app has been shared with other members of the MTC team who do not possess simulation expertise. Distributing this easy-to-use tool throughout the organization has offered a simple way for team members to test and validate designs, expediting the simulation process and providing customers with faster results. Additionally, the availability of the app to the MTC engineers means that they are able to respond to companies who want to explore the use of this additive technology very rapidly and at a low cost.

The Road Ahead for the MTC

The team at the MTC has already begun making updates to their simulation app, further enhancing its functionality and adding new resources for the end-users. Using the Physics Builder, the engineers have started designing a customized physics interface that will enable the modeling of more complex tool paths and melt pools. Tailored to their design needs, this interface will offer engineers an easier and faster method of implementation that is less prone to error.

To further improve the usability of the app, the MTC is planning to offer more contextual guidance through the card stack tool provided by the Application Builder. For increased accuracy, they have plans to add the capability of modeling the evolution of the microstructure on a macroscopic level to predict heat-affected zones.

Recognizing the advantages of building simulation apps, the MTC is looking to create additional apps to evaluate topology optimization as well as the modeling of hot isostatic pressing (HIP). They are also interested in potentially linking COMSOL Server™ with their own cluster to provide a secure environment for managing, running, and sharing simulation apps. This would be especially beneficial for those companies that do not possess high computational power.

Dear authors. How did you do that layers appear consistently. The next row becomes visible, only after the bottom is completely built? The geometry module in the comsole does not support time