Analyzing Heat and Mass Transfer During Cake Baking with Simulation

Sometimes when you bake a cake, it doesn’t turn out how you expected. Part of this is due to the underlying heat and mass transfer phenomena that occur within the baking process, which affect the end result. With tools like the COMSOL Multiphysics® software, you can study and predict how these mechanisms work and use this knowledge to bake a better cake.

The Art and Science of Baking a Cake

Baking is designed to not only heat a product, such as a cake, but also to prompt the biochemical reactions of the recipe’s ingredients. The combination of dry and wet ingredients creates a mixture that gives the cake flexibility, allowing it to expand while still holding the mixture together. 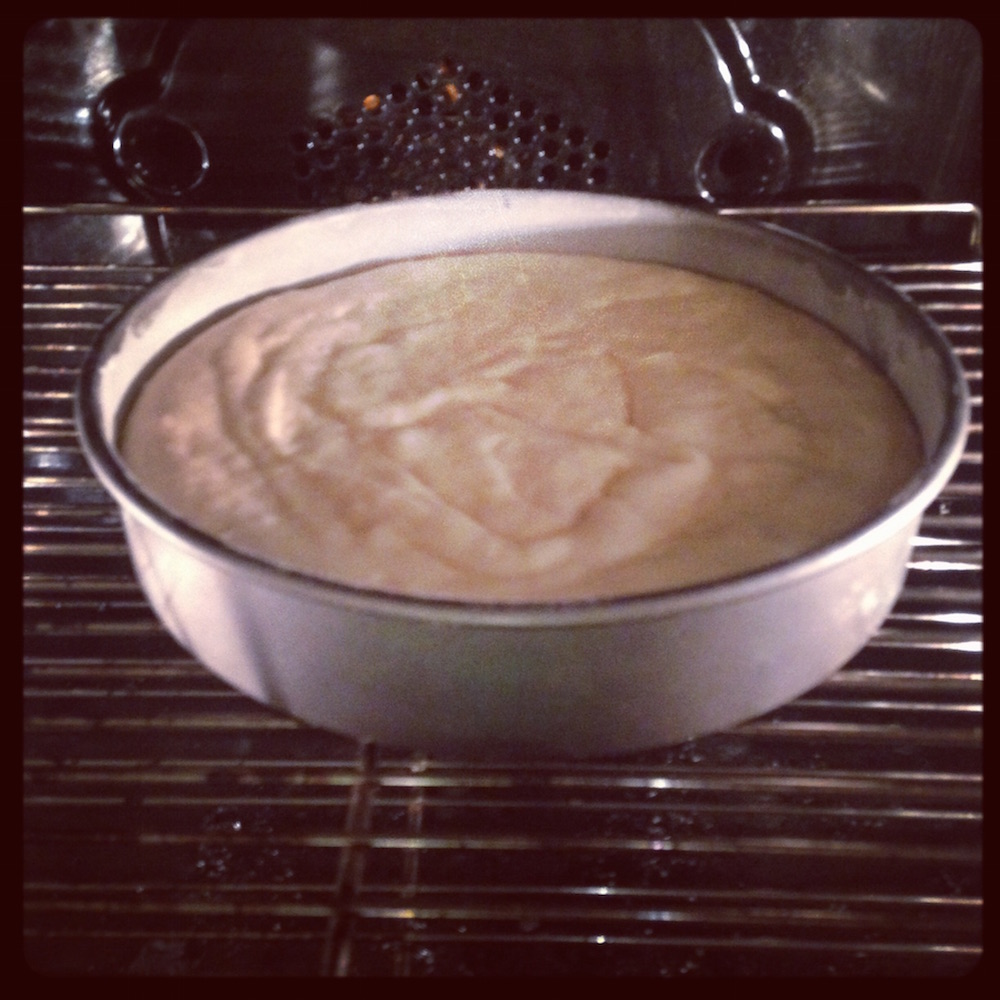 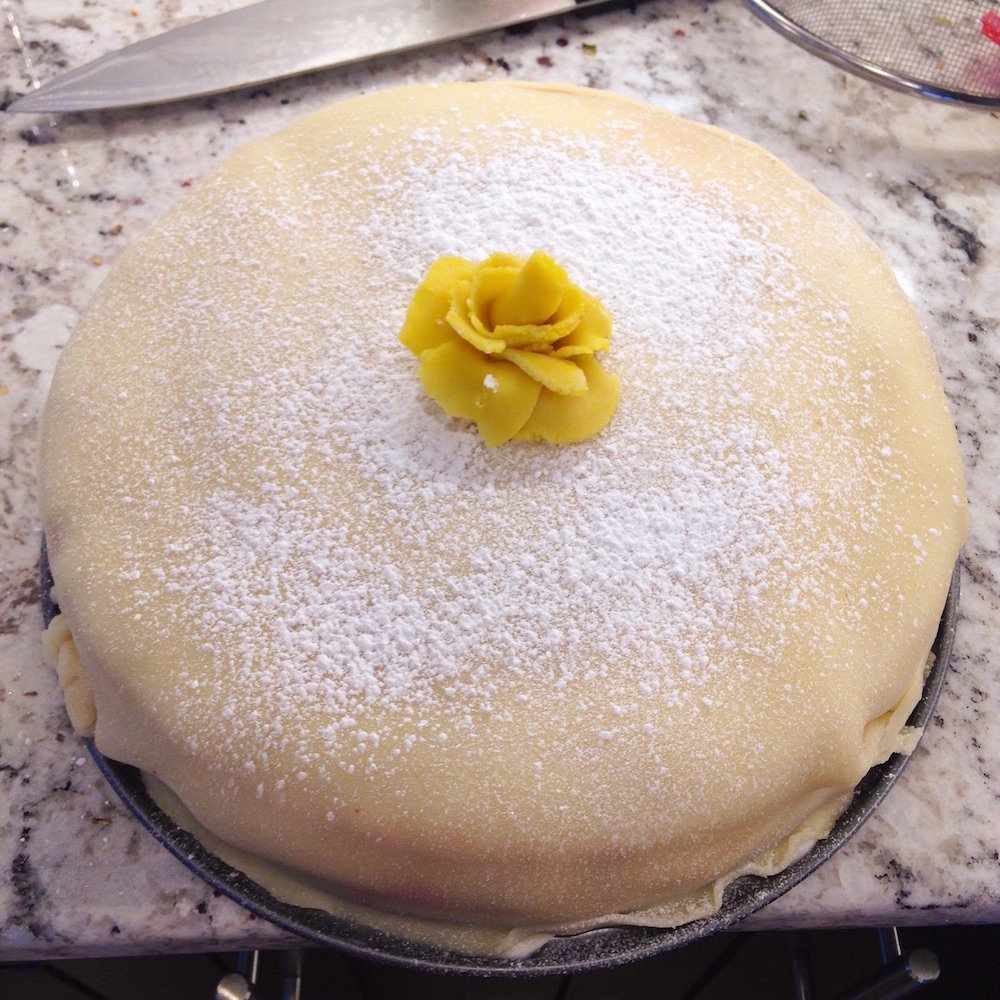 Cake batter baking in the oven (left) and the finished cake (right).

Although ensuring the right amount of each ingredient is important to this end, it is also key to account for the heat and mass transfer phenomena that take place during the baking process. These underlying mechanisms can have a large impact on the temperature and moistness of the cake as well as the degree to which it swells. This in turn affects the overall quality and taste of the baked good.

In an effort to better understand and predict heat and mass transfer phenomena during cake baking, one team of researchers created a numerical model with COMSOL Multiphysics and ran a series of simulation studies. Here’s a taste of what they found.

For their analysis, the researchers created a 2D axisymmetric model. The medium was assumed to be deformable and porous, containing three phases:

To address this problem, a system of five coupled partial differential equations was solved. The five variables included in the analysis were:

To predict the swelling of the batter (a result of the increase in total gas pressure), the researchers used a viscoelastic model from the Structural Mechanics Module, an add-on product to COMSOL Multiphysics. 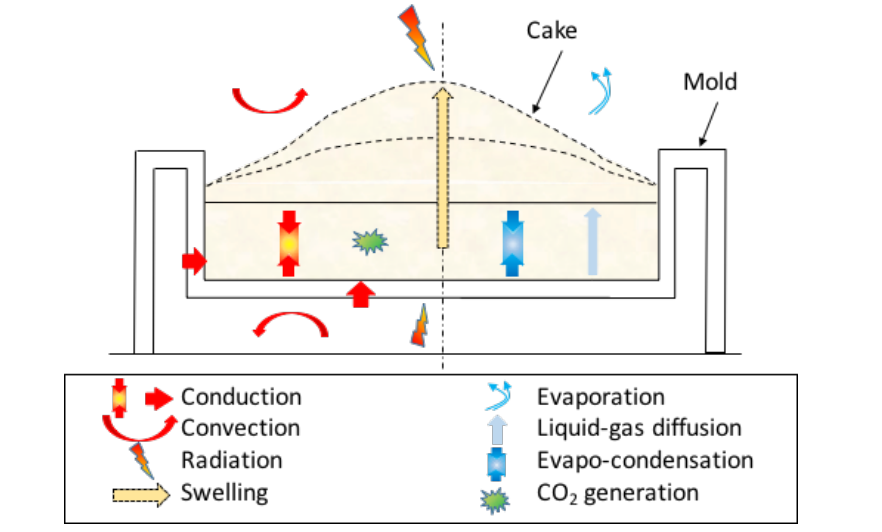 As a means of validating the model, the researchers carried out a series of experimental tests. These experiments involved baking a cake for 18 minutes in an oven with a floor wall temperature of 175ºC and top wall temperature of 195ºC. Instruments used within the setup provided information about the batter’s thermal and moisture content as well as the boundary conditions. A camera was used to track the swelling of the cake.

In the simulation analysis, the researchers plotted the temperature and moisture content within the cake at three different intervals:

The plots below depict the results for each instance, also showing the swelling of the cake. These results indicate that the evaporation-condensation phenomenon causes the water content at the core of the cake (crumb) to increase. On the other hand, the water content decreases at the surface of the cake (crust). As observed in other baking processes, this physical phenomenon contributes to the formation of large moisture content gradients. These gradients create heterogeneity between porosity and thermal, hydric, and mechanical properties. Such heterogeneous characteristics are further driven by the heating mode.

The temperature and moisture content inside the cake at various time intervals. Image by R. Cutté, P. Le Bideau, P. Glouannec, and J.F. Le Page and taken from their COMSOL Conference 2016 Munich abstract.

When comparing these simulation results to the experimental findings, there is agreement with respect to temperatures, mass losses, and global deformation. Note that because of the model that is used, the expansion-reduction effect is not accounted for in this case. However, there are plans to improve this by testing other mechanical constitutive laws in the future. To make the model even more accurate, the researchers also plan to add a gas phase with three species (water, CO2, and air) to the model; implement reaction kinetics; and predict the brownness of the cake.

The simulation results and experimental findings for the temperature (left) and moisture content (right) inside the cake. Images by R. Cutté, P. Le Bideau, P. Glouannec, and J.F. Le Page and taken from their COMSOL Conference 2016 Munich poster.

Left: The simulation results and experimental findings for the swelling of the cake. Right: Comparison between the final deformed meshing and the real geometry. Images by R. Cutté, P. Le Bideau, P. Glouannec, and J.F. Le Page and taken from their COMSOL Conference 2016 Munich presentation.

Better Understand the Underlying Mechanisms of Cake Baking with Simulation

Baking a cake is not just an art; it’s a science. With COMSOL Multiphysics, you can create a simple yet realistic model to describe this complex process, specifically the heat transfer and mass transfer phenomena that are involved. The results generated from this model provide a better understanding of the cake baking process as a whole.