How to Implement the Fourier Transformation from Computed Solutions

In this approximation formula, the diffracted field is calculated by Fourier transforming the incident field multiplied by the quadratic phase function {\rm exp}\{-i\pi (x^2+y^2)/(\lambda f)\}.

Now, let’s take a look at an example of a Fresnel lens. A Fresnel lens is a regular plano-convex lens except for its curved surface, which is folded toward the flat side at every multiple of m \lambda/(n-1) along the lens height, where m is an integer and n is the refractive index of the lens material. This is called an mth-order Fresnel lens.

The shift of the surface by this particular height along the light propagation direction only changes the phase of the light by 2m \pi (roughly speaking and under the paraxial approximation). Because of this, the folded lens fundamentally reproduces the same wavefront in the far field and behaves like the original unfolded lens. The main difference is the diffraction effect. Regular lenses basically don’t show any diffraction (if there is no vignetting by a hard aperture), while Fresnel lenses always show small diffraction patterns around the main spot due to the surface discontinuities and internal reflections. 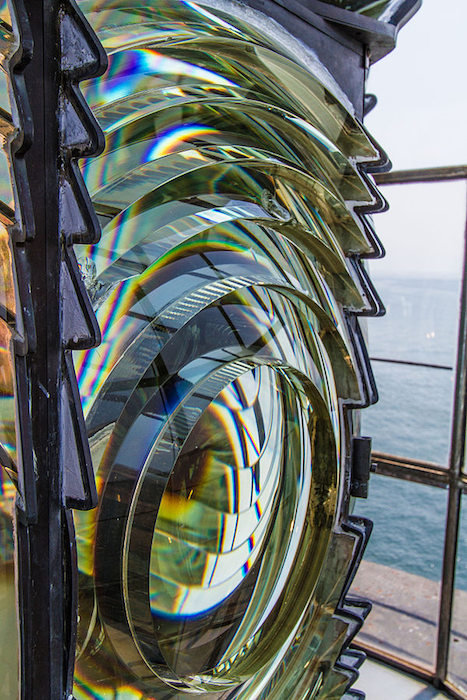 A Fresnel lens in a lighthouse in Boston. Image by Manfred Schmidt — Own work. Licensed under CC BY-SA 4.0, via Wikimedia Commons.

Why are we using a Fresnel lens as our example? The reason is similar to why lighthouses use Fresnel lenses in their operations. A Fresnel lens is folded into m \lambda/(n-1) in height. It can be extremely thin and therefore of less weight and volume, which is beneficial for the optics of lighthouses compared to a large, heavy, and thick lens of the conventional refractive type. Likewise, for our purposes, Fresnel lenses can be easier to simulate in COMSOL Multiphysics and the add-on Wave Optics Module because the number of elements are manageable.

The figure below depicts the optics layout that we are trying to simulate to demonstrate how we can implement the Fourier transformation, applied to a computed solution solved for by the Wave Optics, Frequency Domain interface. 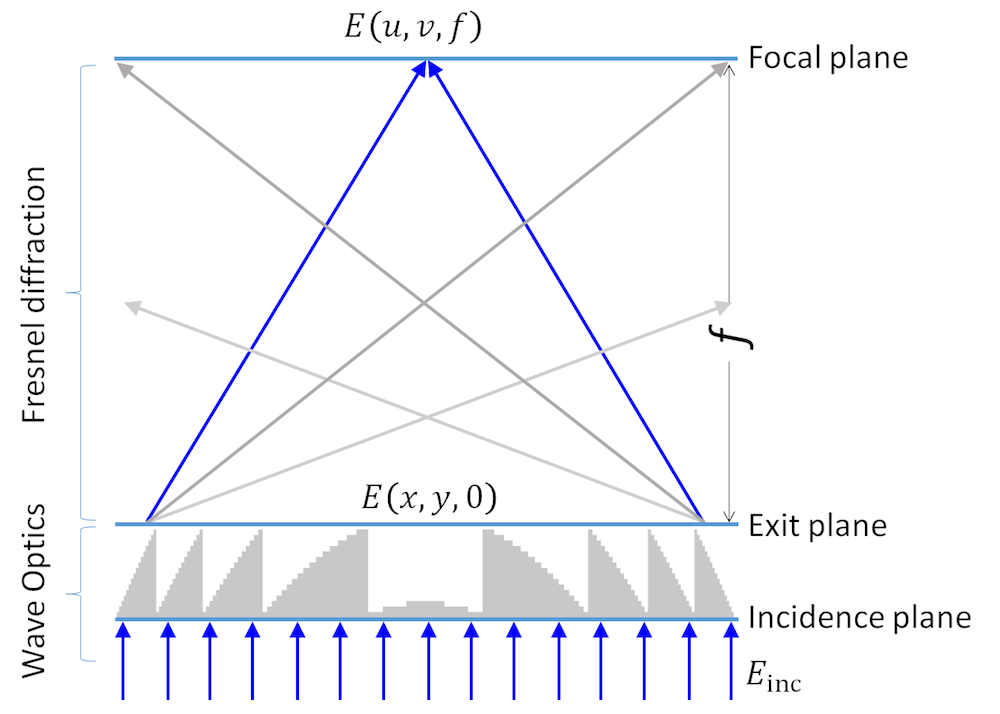 This is a first-order Fresnel lens with surfaces that are digitized in 16 levels. A plane wave E_{\rm inc} is incident on the incidence plane. At the exit plane at z=0, the field is diffracted by the Fresnel lens to be E(x,y,0). This process can be easily modeled and simulated by the Wave Optics, Frequency Domain interface. Then, we calculate the field E(u,v,f) at the focal plane at z=f by applying the Fourier transformation in the Fresnel approximation, as described above.

The figures below are the result of our computation, with the electric field component in the domains (top) and on the boundary corresponding to the exit plane (bottom). Note that the geometry is not drawn to scale in the vertical axis. We can clearly see the positively curved wavefront from the center and from every air gap between the saw teeth. Note that the reflection from the lens surfaces leads to some small interferences in the domain field result and ripples in the boundary field result. This is because there is no antireflective coating modeled here.

The computed electric field component in the Fresnel lens and surrounding air domains (vertical axis is not to scale).

The computed electric field component at the exit plane.

Implementing the Fourier Transformation from a Computed Solution

In today’s example, the source space is already created in the computed data set, Study 1/Solution 1 (sol1){dset1}, with the computed solutions. All we need to do is create a one-dimensional data set, Grid1D {grid1}, with parameters for the Fourier space; i.e., the spatial coordinate u in the focal plane. We then relate it to the source data set, as seen in the figure below. Then, we define an integration operator intop1 on the exit plane.

Settings for the data set for the transformation.

The intop1 operator defined on the exit plane (vertical axis is not to scale).

Finally, we define the Fourier transformation in a 1D plot, shown below. It’s important to specify the data set we previously created for the transformation and to let COMSOL Multiphysics know that u is the destination independent variable by using the dest operator. 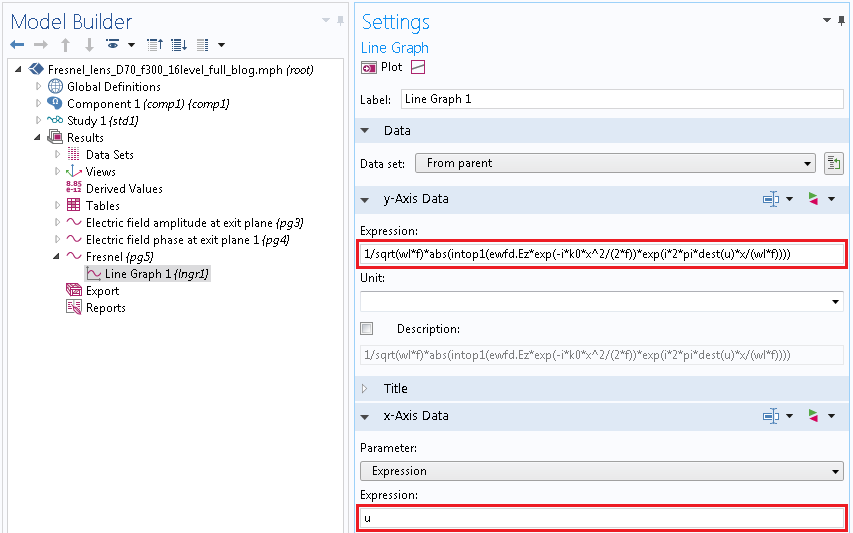 Settings for the Fourier transformation in a 1D plot.

The end result is shown in the following plot. This is a typical image of the focused beam through a multilevel Fresnel lens in the focal plane (see Ref. 2). There is the main spot by the first-order diffraction in the center and a weaker background caused by the zeroth-order (nondiffracted) and higher-order diffractions.

Electric field norm plot of the focused beam through a 16-level Fresnel lens.

In this blog post, we learned how to implement the Fourier transformation for computed solutions. This functionality is useful for long-distance propagation calculation in COMSOL Multiphysics and extends electromagnetic simulation to Fourier optics.

Download the model files for the Fresnel lens example by clicking the button below.

Dear Professor,
I am a student in China.My name is zhang xinfeng.
I am really interested in your fresnel lens research.I have a problem to simulate the fresnel lens structure .I hope you can give me this comsol file. Really appreciate!
Here is my email : xinfengzhang26@gmail.com
Wish you all the best !

Dear 欣峰,
Thank you for reading this blog.
We now have version 5.3 update 2 the day before yesterday.
If you update your Application Libraries, you will find this new Fresnel lens model under Wave Optics > Verification Examples.
Please let me know if you are not able to get it.
Best regards,
Yosuke

Dear Professor Yosuke,
It is really happy to receive your reply, and I do not imagine that you can give me a timely reply.
I try to follow your advice and update my comsol software to the latest version, but unfortunately fails down.my comsol software is 5.2a version .Would you send me the file if you have the fresnel lens model with 5.2a version.Really appreciate.
Welcome to China.
Best regards.
Here is my email address: xinfengzhang26@gmail.com
张欣峰

Dear 欣峰,
Unfortunately, we didn’t make it with any older version. So it is the only way for you to upgrade your COMSOL to the latest version. I hope you could manage to do it.
Best regards,
Yosuke

Dear Professor Yosuke,
Thanks a lot. I have fixed the problem.
It is a nice experience to talk with you.
Best regards.
张欣峰

It was nice talking to you too!
Best regards,
Yosuke

Thanks in advance.
Sriram

Dear Sriram,
Thank you for reading my blog.
I’m afraid I don’t understand your question and your problem.
Can you please explain what you would like to do a little more specifically?
Best regards,
Yosuke

Hi Prof. Yosuke,
Sorry about that.

Please, could you mention the further steps to plot the computed Fourier transformation field pattern in momentum space?

Dear Sriram,
What are you referring to by the term “momentum space”?
Best regards,
Yosuke

Dear Professor,
I am a student in Taiwan. My name is Yi-Feng,Chiu.
May I ask you a question about Fresnel lens different with Kinoform?
Can this files simulate about bi-focal or tri-focal? Thanks
Here is my email: max816005@gmail.com
Best regards

Dear Iverson,
Thank you for reading my blog.
I’m not 100% sure if I understand your question correctly but …
Perfectly designed and perfectly fabricated kinoforms don’t show multi-foci because the diffraction efficiency for the designed order is 100%.
But in practice, almost all Fresnel lenses show multi-foci because of finite number of digitization level, defects, fabrication errors, wavelength mismatch, shadowing effect etc.
So, even in simulation, if you don’t have enough digitization level, for example, it should show higher diffraction order foci.
fresenel_lens.mph in the Application Libraries is made with 16 levels, which is high enough so that it’s difficult to see higher order foci.
But if you change the digitization level to, say 4, and run it with the Beam Envelope interface (Study 2), you can clearly see other foci corresponding to higher order diffraction.
The second order diffraction focus can be seen at around 75 um.
You can see even the third and forth orders.
I hope I’m answering your question correctly.
Best regards,
Yosuke

If you look at f/2 plane in the model, you will see the 2nd order diffraction

Dear Prof. Yosuke,
Thank you for your reply. I appreciate it.
I want to ask if there is a structure that can produce 3 diffractive orders.
Like this article https://patentimages.storage.googleapis.com/6b/c9/9d/46cdb43376a78b/WO2020053864A1.pdf
Here is my email: max816005@gmail.com
Best regards
Does the professor have any thoughts or opinions?