Spiders are a common fear for many people, but a perplexing behavior suggests that they’re actually a whole lot scarier — or more interesting, depending on your stance on these 8-legged creepy-crawlies. It turns out that some spiders can float for hundreds of miles and some have even been spotted more than two miles above the ground. How do these wingless creatures go airborne? Researchers from the University of Bristol used simulation and physical experiments to help shed some light on this age-old mystery.

From 1831 to 1836, Charles Darwin sailed around the world on the HMS Beagle. On this ship, he worked as a naturalist, filling his journal with observations of plants and animals. On Halloween in 1832, Darwin witnessed something spooky on the deck of the ship: hundreds of tiny floating eyes peering back at him. These eyes belonged to a massive colony of spiders. The ship was nowhere close to the shore and Darwin knew the tiny wanderers had to have traveled a great distance to make their way aboard. Darwin wrote in his journal: “I caught some of the Aeronaut spiders which must have come at least 60 miles.”

More recently, in 2015, this phenomenon occurred in the Southern Tablelands region in Australia, when millions of spiders reportedly descended from the sky. This mass spider parachuting event resulted in large amounts of silk webs covering the land — making it appear like a snowstorm hit the region!

This peculiar arachnid behavior is known as ballooning, or when spiders climb atop a pointy surface (such as a tree branch or a blade of grass), raise their abdomen to the sky, release silk from their spinnerets, and launch into the air. 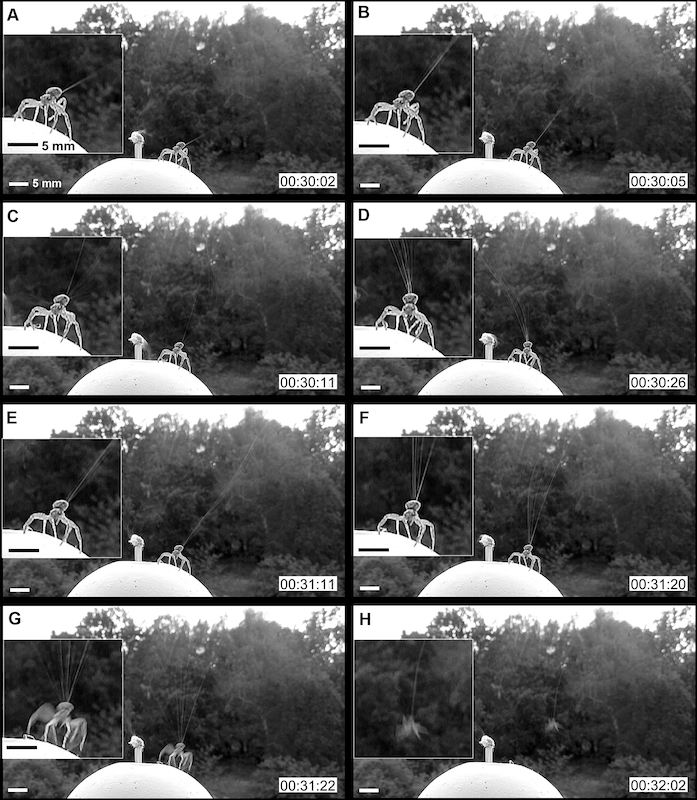 Throughout history, this gravity-defying act, displayed by some arachnids and other invertebrates, has been a topic of scientific debate. Some researchers believe the effect is caused solely by the wind, drifting the spiders and their silk thread hundreds of miles across land and ocean, while others think it has something to do with Earth’s electric fields.

Investigating the Behavior of Gravity-Defying Spiders

Researchers Erica Morley and Daniel Robert from the University of Bristol investigated this phenomenon with the help of physical experiments and simulation. They shared their work in a 2018 paper published in Current Biology.

“Here, we test the hypothesis that electric fields (e-fields) commensurate with the [atmospheric potential gradient] (APG) can be detected by spiders and are sufficient to stimulate ballooning.”

The APG, located between Earth and the ionosphere, is an electric field that is consistently present in the atmosphere. It varies in strength and polarity based on local weather conditions and is strongest during lightning storms. The APG is a result of the interaction between Earth’s negatively charged surface and the positively charged ionosphere. Insects, like bumblebees and honeybees, have been known to detect and use e-fields, but prior to Morley and Robert’s research, it remained a mystery whether spiders had the same e-field detection ability. 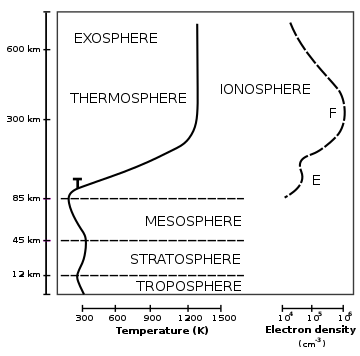 Earth’s atmosphere and ionosphere. Image in the public domain, via Wikimedia Commons.

Before discussing their experiment and simulation work, Morley and Robert first touched on several issues surrounding the theory that arachnid flight can be accounted for by wind alone.

“Many spiders balloon using multiple strands of silk that splay out in a fan-like shape. Instead of tangling and meandering in light air currents, each silk strand is kept separate, pointing to the action of a repelling electrostatic force.” 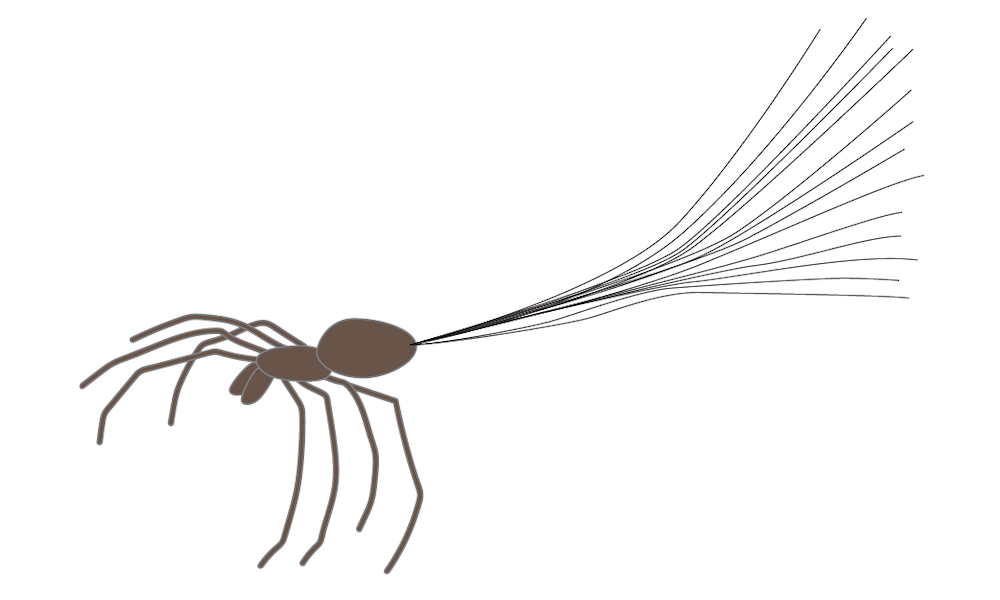 An illustration of a spider’s silk strands while ballooning.

Morley and Robert also point out that spiders only balloon during periods of very light wind (below 3 ms-1), but models show that such wind conditions would not be strong enough to enable large spiders to balloon. However, large spiders have been sighted displaying this effect, further supporting the hypothesis that there must be something else at play than just aerodynamic drag from the wind alone.

To begin, Morley and Robert captured and introduced adult Erigone spiders (aka money spiders) to a large plastic box (1 m x 1 m x 1 m), where each spider was carefully placed on a vertical strip of cardboard. The entire test took place in a Faraday cage room, an enclosure used to block out electromagnetic fields. Humidity and temperature levels were measured during the duration of their experiment, in the ranges of 50.5% RH ± 5.4 and 21.2° ± 0.9, respectively. Many studies have shown spiders typically balloon in low levels of humidity.

While in the box, the spiders were exposed to electric fields, similar to the ones they would experience in their natural environment, and began to display a behavior only ever witnessed in spiders prior to ballooning: tiptoeing. Like their hypothesis suggested, when the electric field was turned on, the spiders began ballooning, and when it was turned off, the spiders stopped their gravity-defying stunt midflight. 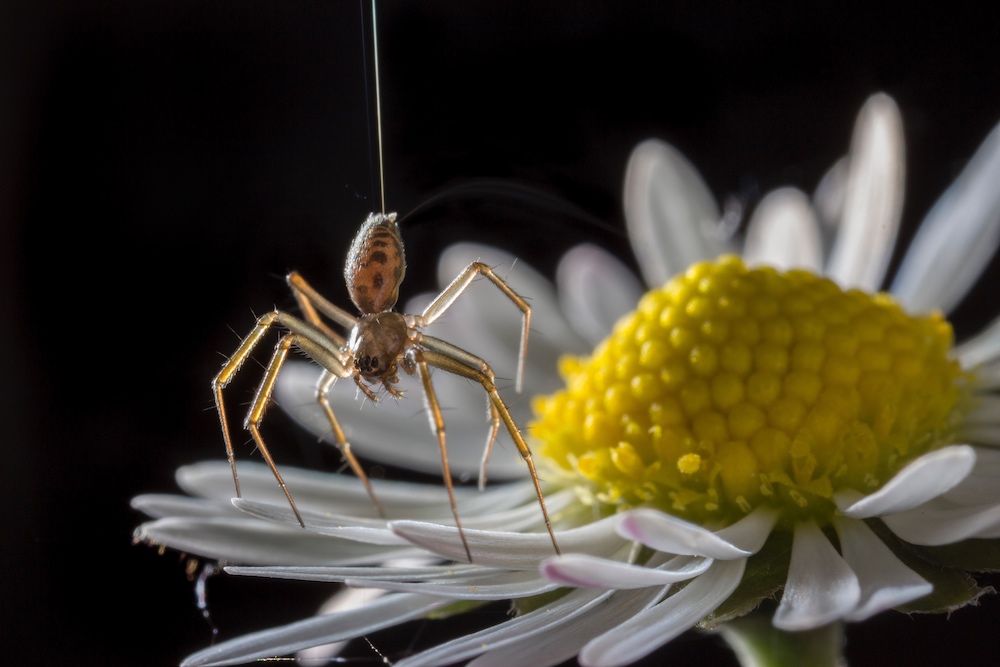 Money spiders are typically a few mm in length and are known for their ballooning behavior. Image by Mike Hutchinson, courtesy D. Robert, University of Bristol. 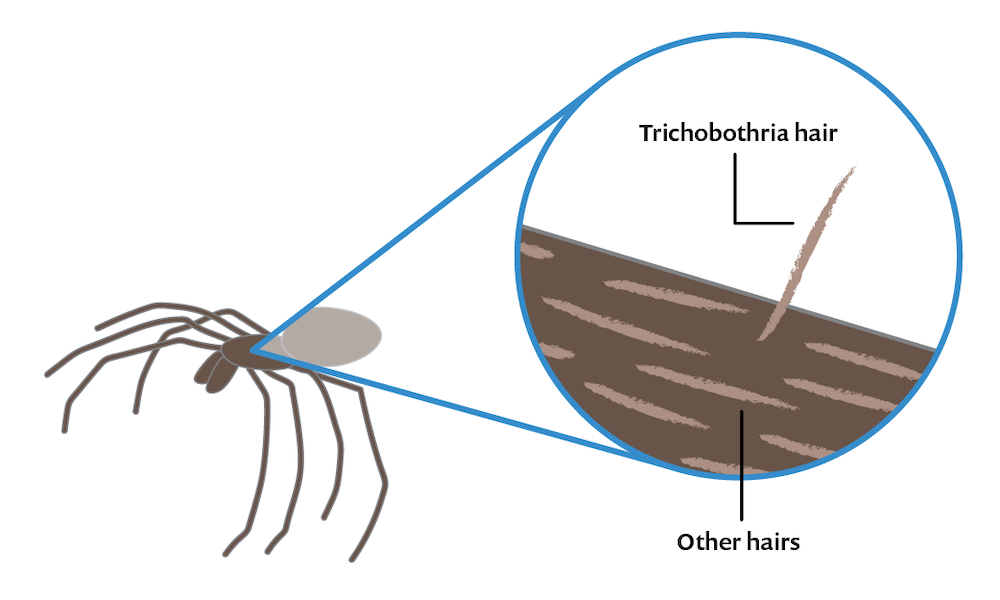 An illustration of a trichobothria hair on a spider.

As a result of their findings, Morley and Robert think a combination of wind and electric fields are what elicit spiders to balloon.

After completing their experiment, the research duo switched to conducting simulation studies. Using the COMSOL Multiphysics® software, they performed a finite element analysis (FEA) and generated finite element models of the APF around trees and electric fields inside the experimental arena.

“The models of the APG-tree interactions were produced by modeling the APG during unsettled weather with an electric field strength of either 1 kVm−1 or 4 kVm−1. Here, electrical ground was beneath 5 m of soil which had an electrical boundary with the tree.”

The researchers modeled the experimental arena as a cardboard takeoff site (with fitting material properties) and the electric potential as a plate above the air. Just like in the actual experiment, a dish of water was modeled beneath the takeoff site. (In the experiment, the water dish was used to prevent the spiders from escaping).

In their model, the surface of their experimental arena was kept at ground potential and the top plate of the arena was set at 5000 V — the maximum voltage used in their physical experiments.

Left: FEA model of the electric field enhancement around an oak tree in an APG strength of 4 kVm-1. Image courtesy E.L. Morley and D. Robert, University of Bristol. Right: Solitary oak tree in the Netherlands. Image by Jürgen Eissink. Licensed under CC BY-SA 4.0, via Wikimedia Commons.

It’s important to model the APF around trees and their branches because spiders often balloon atop such surfaces. (Electric fields are strongest around pointed surfaces due to their sharp geometry, which may explain why spiders choose to perform their gravity-defying trick on them.)

Why Do Spiders Perform this Gravity-Defying Feat?

No matter the reasoning behind their departure, some researchers believe that this effect has played a role in allowing spiders to be the first species to colonize new land, such as volcanic islands or areas destroyed by natural disasters.

By studying ballooning behavior in arachnids, we can further understand population dynamics, species distribution, and ecological resilience — all of great importance for global ecology.

So, if you ever happen to see a massive cluster of spiders drifting through the air, don’t panic. After all, it’s science! 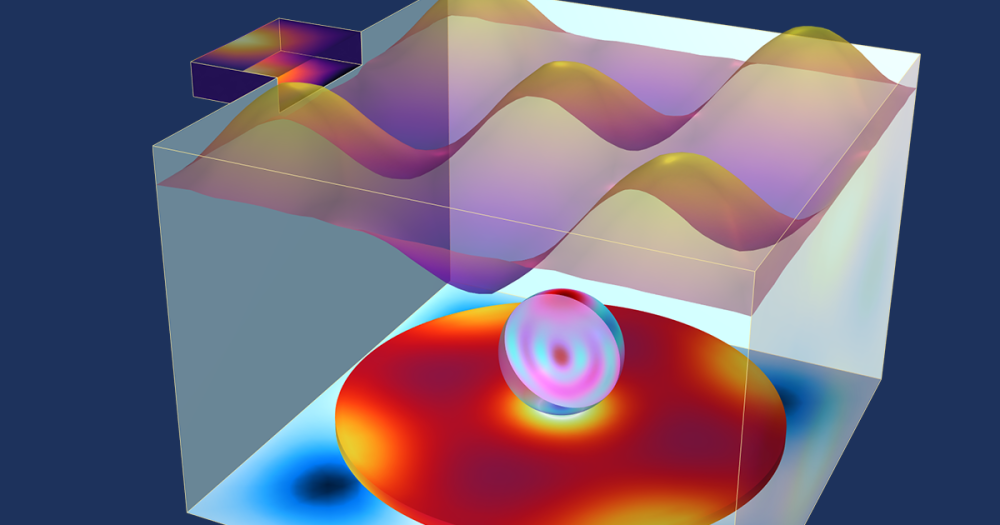