Research shows that microgravity exposure has an effect on the human body, such as by suppressing immune cell activity. This phenomenon also affects cancer cell migration. Making use of this fact can lead to the identification of new therapeutic targets for metastatic cancer cells. In this blog post, we’ll discuss how a research team used the COMSOL Multiphysics® software to design a culturing system to study cancer cell migration in microgravity.

Studying the Effect of Microgravity on Metastatic Cancer Cells

Microgravity is the condition of “free fall” experienced by, for example, objects like satellites that “fall” toward Earth but actually never reach its surface. In this condition, gravity and weight does exist, but is not measurable on a scale. Some people refer to this as zero gravity.

Applying conditions of microgravity to certain systems and processes enables scientists to study them without accounting for effects like hydrostatic pressure and sedimentation. By investigating biological processes exposed to microgravity conditions, we can advance technologies associated with tissue engineering, stem cell research, vaccine development, and more.

One area where microgravity is proving helpful is cancer research. From previous studies, we know that microgravity exposure suppresses immune cell activity and changes genomic and proteomic expressions. As such, scientists are investigating whether these changes also influence cancer development. The goal is to find novel therapeutic targets for metastatic cancer cells by influencing their migration, and therefore their activity.

A research team from SUNY Polytechnic Institute and SpacePharma, Inc. joined forces to develop a culturing system to test how microgravity affects metastatic cancer cell migration. This system isolates gravity as an experimental variable, thereby determining its contribution to cellular function in normal gravity on Earth. Considering the behavior of the culturing system in Earth’s gravity will initially provide insight into how microgravity conditions can be used for lab-scale experiments. The simulation technique will eventually be translated and used for space flight experiments within a low Earth orbit (LEO).

Running these microgravity experiments in the normal gravity of Earth can be difficult and requires a robust system design. CFD simulation is one way to help understand this problem, augment a good design, and optimize operating and flow conditions.

Designing a System to Analyze Cancer Cell Migration in Microgravity

First, let’s take a closer look at the cell culturing system, which exposes human cancer cells (contained in cell culture chambers) to microgravity conditions. To increase the number of cells during cell maintenance, the system supplies growth media via a media inlet. The system can also reduce the number of cells — and avoid overcrowding — by lifting the cells with trypsin and flushing them out. Another key element in this system is chemoattractants, which influence cell migration. 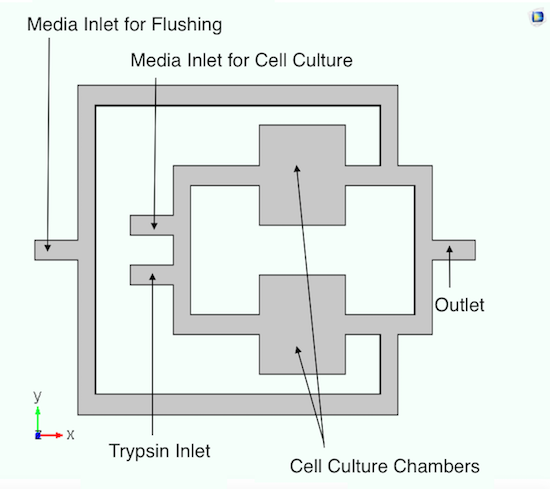 The initial design of the culturing system. Image by A. Dhall et al. and taken from their COMSOL Conference 2016 Boston poster.

To perform the preliminary analyses of the culturing system, the research team used two interfaces:

When using the Single-Phase Flow interface, the team tested for backflow into the cell culture chamber when the outer channel is flushed with cell growth media. From their results, the researchers found that using either valves or nozzle-diffuser flow can help avoid backflow. 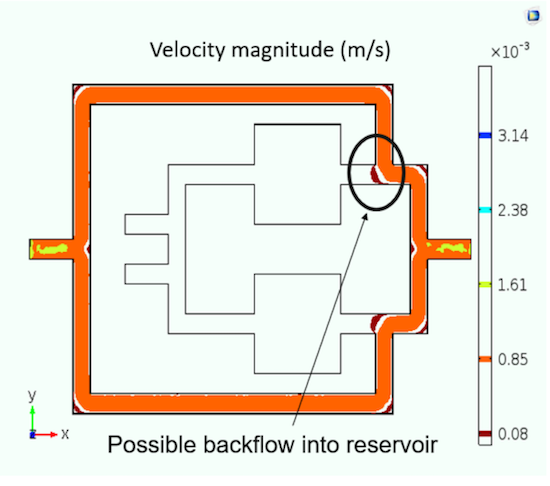 The potential backflow in a cell culture system that occurs due to flushing media through the outer channels of a culture unit. Image by A. Dhall et al. and taken from their COMSOL Conference 2016 Boston presentation.

Simulation was also used to calculate the optimal flow rate range under the chosen operating conditions. In these studies, the researchers modified the culture chip system to contain three chambers, as shown below. 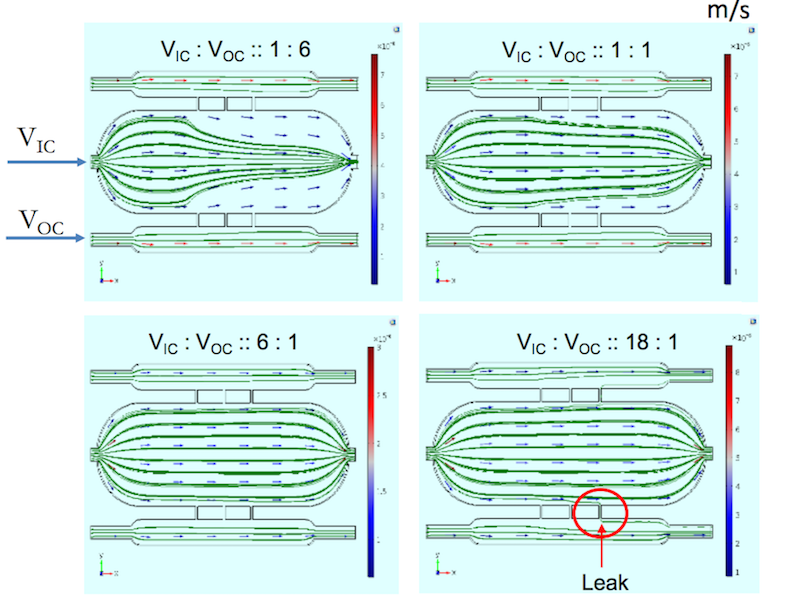 In the image below, the flow in the outer chambers runs opposite to the flow in the inner chamber. The result is that the cell growth media leak through all of the channels. Using the information they learned about the leakage, the team can improve the design of the cell culture chip. 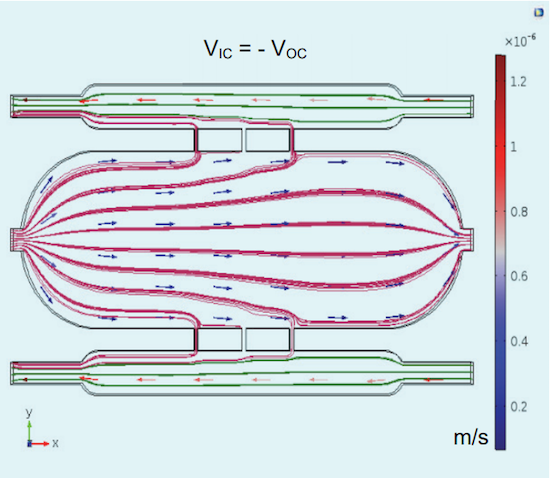 Leakage in the cell culture chip system when the flow of the cell growth media has equal and antiparallel input velocities. Image by A. Dhall et al. and taken from their COMSOL Conference 2016 Boston paper.

The final simulations are of the diffusion of the chemoattractant along a gradient. The chemoattractant has an initial concentration of 0.04 mM and travels through a 0.6-mm migration channel. Simulating this migration shows that the researchers can establish a gradient at a practical timescale for cell migration experiments.

Diffusion of the chemoattractant over time. Image by A. Dhall et al. and taken from their COMSOL Conference 2016 Boston presentation.

Designing a functional culturing system is the key to successfully studying cancer cell migration in microgravity conditions, thus identifying new therapeutic targets for cell mestatatic behavior. In the future, the research team plans to enhance their study by looking into how the cell growth media and chemoattractant interact.