For our example, we will use a model that couples the Navier-Stokes equations and the heat transfer equations to model natural convection in a square cavity with a heated wall. The temperature on the left and right walls is 293 K and 294 K, respectively. The top and bottom walls are insulated. The fluid is air and the length of the side is 10 cm. 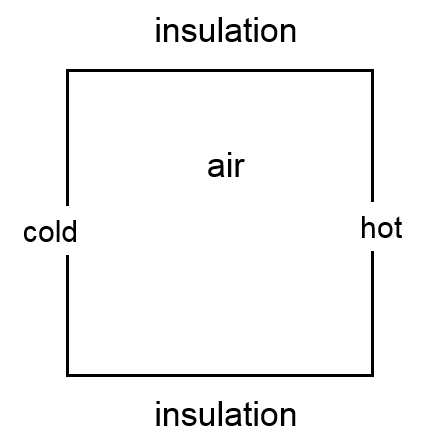 We will use this model to compare the computational cost of three different modeling approaches:

Each of these three approaches and their variables are defined here.

In COMSOL Multiphysics, the model is solved with a stationary study using the Laminar Flow, and Heat Transfer in Fluids interfaces, and the Non-Isothermal Flow multiphysics coupling: 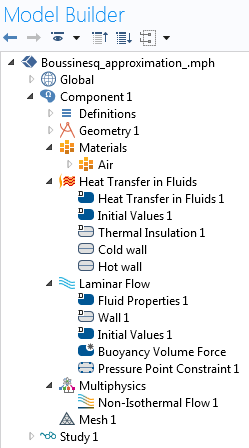 While setting up the model, it is important to check whether the flow is laminar or turbulent. For a natural convection problem, this is done by calculating the Grashof number, Gr. For an ideal gas, it is defined as

When using the full Navier-Stokes equation, we set the buoyancy force to \rho \mathbf{g}: 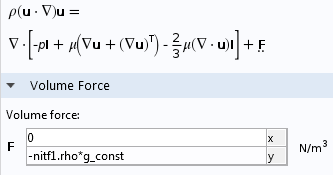 The buoyancy term is added using a volume force feature. The terms nitf1.rho and g_const represent the temperature- and pressure-dependent density, \rho, and the gravitational acceleration, \mathbf{g}, respectively.

When using the Navier-Stokes equations with pressure shift, we have to make three changes.

First, we need to change the definition of the volume force to (\rho-\rho_0)\mathbf{g}, as such:

The term rho0 refers to the reference density \rho_0.

Next, we evaluate the reference density \rho_0 and the reference viscosity \mu from the material properties in a table of variables:

Here, pA and T0 represent the reference temperature and pressure.

The air viscosity is set to the constant \mu_{0}:

Finally, when using the Boussinesq approximation, we need to set the buoyancy force to -\rho_0\frac{T-T_0}{T_0}\,\mathbf{g}: 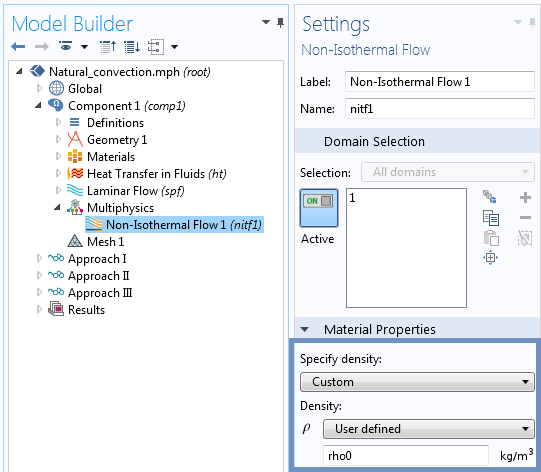 The mesh is made of 15,000 triangular elements and 1,200 boundary layer elements. These are first-order elements. 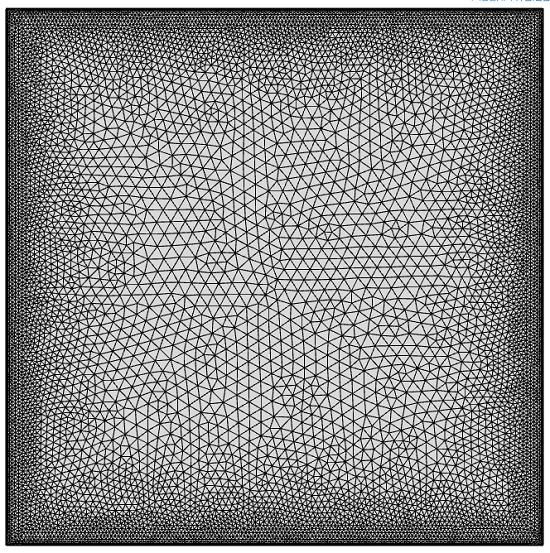 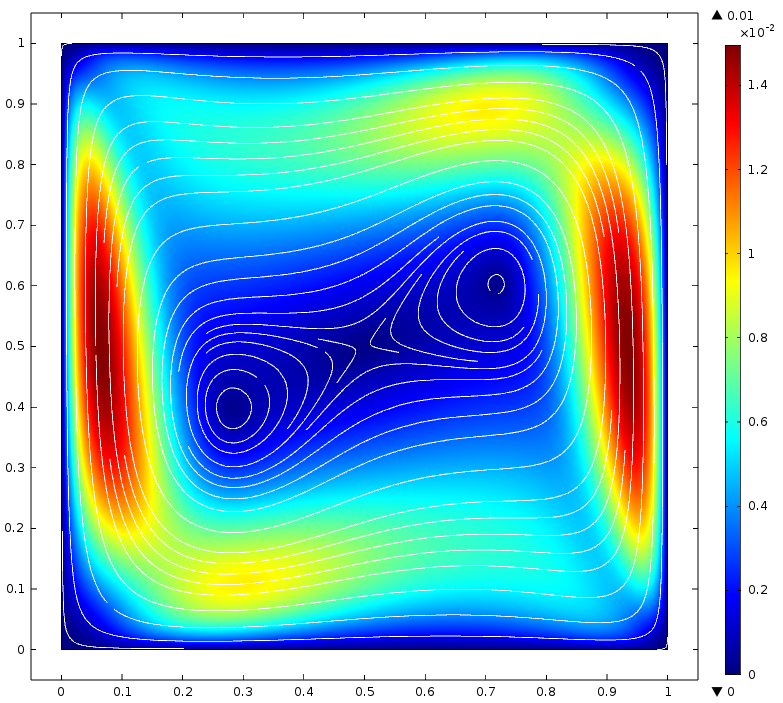 Because of the short running time of this 2D simulation (around 30 seconds), we look at the computational load by comparing the number of iterations it takes the solver to converge to the steady-state solution. The number of iterations, in this case, is nearly proportional to the CPU time.

The table below compares the number of iterations across all three approaches.

These results are very surprising!

Here’s a look at the COMSOL Multiphysics settings window for the default solver settings with pseudo time stepping: 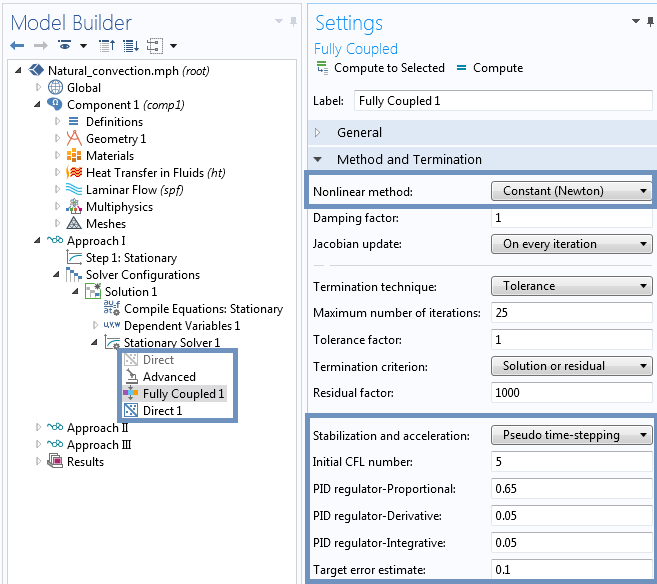 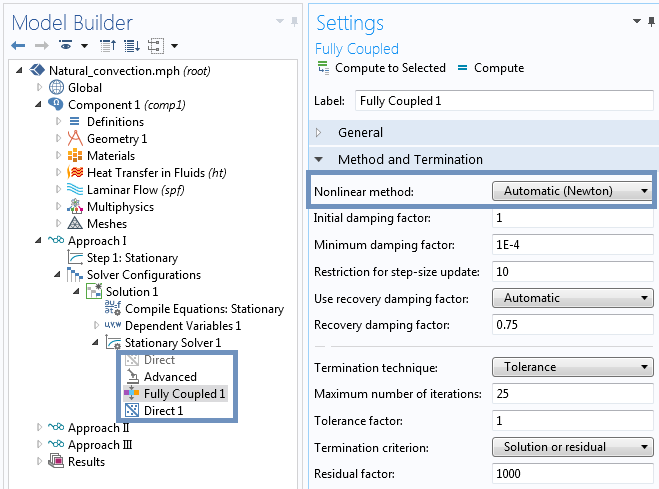 Note on the solver settings for natural convection:

This second table shows the number of iterations without pseudo time stepping:

These results make more sense than the previous ones with pseudo time stepping. This is because Approach 3, the most linear problem, now converges faster than Approach 1. What is surprising is that Approach 2 and Approach 3 converge with the same number of iterations.

What Did We Learn?

Because of the small speed-up observed with the Boussinesq approximation and the fact it is not always easy to know a priori if the Boussinesq approximation is valid, we generally recommend solving for the full Navier-Stokes equations. Implementing the pressure shift (Approach 2 and 3), however, does avoid round-off errors and simplifies the implementation of time-dependent problems as well as models with open boundaries. This will be the object of a future blog entry.

Using Approach 3 (Boussinesq approximation with pressure shift) involves more implementation steps and does not reduce the number of iterations as compared with Approach 2 (Navier-Stokes equations with pressure shift). The final simulation time might be slightly shorter for Approach 3, since it does not require the evaluation of the temperature- and pressure-dependent density and the temperature-dependent viscosity, but this speed-up might not be noticeable.

The number of iterations is reduced by a factor 4 to 8, depending on the chosen approach, by disabling the pseudo time-stepping algorithm. Please keep in mind, however, that most problems will not converge without pseudo time stepping or other load ramping or nonlinearity ramping strategies.

You can set up and solve this model using the CFD Module or the Heat Transfer Module. If you have any questions about the models that I’ve presented here, contact our Technical Support team. If you are not yet a COMSOL Multiphysics user and would like to learn more about our software, please contact us via this form — we’d love to connect with you.

Hi, Fabrice Schlegel,
How can i mesh just like you did in this post ? Thanks in advance.
Regards,
Motaleb