It was a quiet autumn morning in Boston, Massachusetts. The leaves on the trees were long gone at this point, and the air was crisp. At the time, I was strolling through Boston Common, a park full of tall, historical statues. However, it wasn’t the bronze and granite figures that caught my eye, it was the pigeons (lots and lots of pigeons). As pigeons do, they were feasting on a pile of crumbs in the middle of the road. While they pecked at their meal, I noticed how the feathers around their necks shined shades of emerald and amethyst.

All That Glitters Is Not Gold

When I think of pigeons, I transport back to a time when I was a child, visiting a large farm. On the farm lived a random assortment of animals, including bunnies, chickens, and pigeons. I distinctively remember the way the pigeons would bob their heads when they walked and scavenged for food — a common behavior in Columbidae. (All pigeons belong to the Columbidae family, which consists of over 300 bird species.) 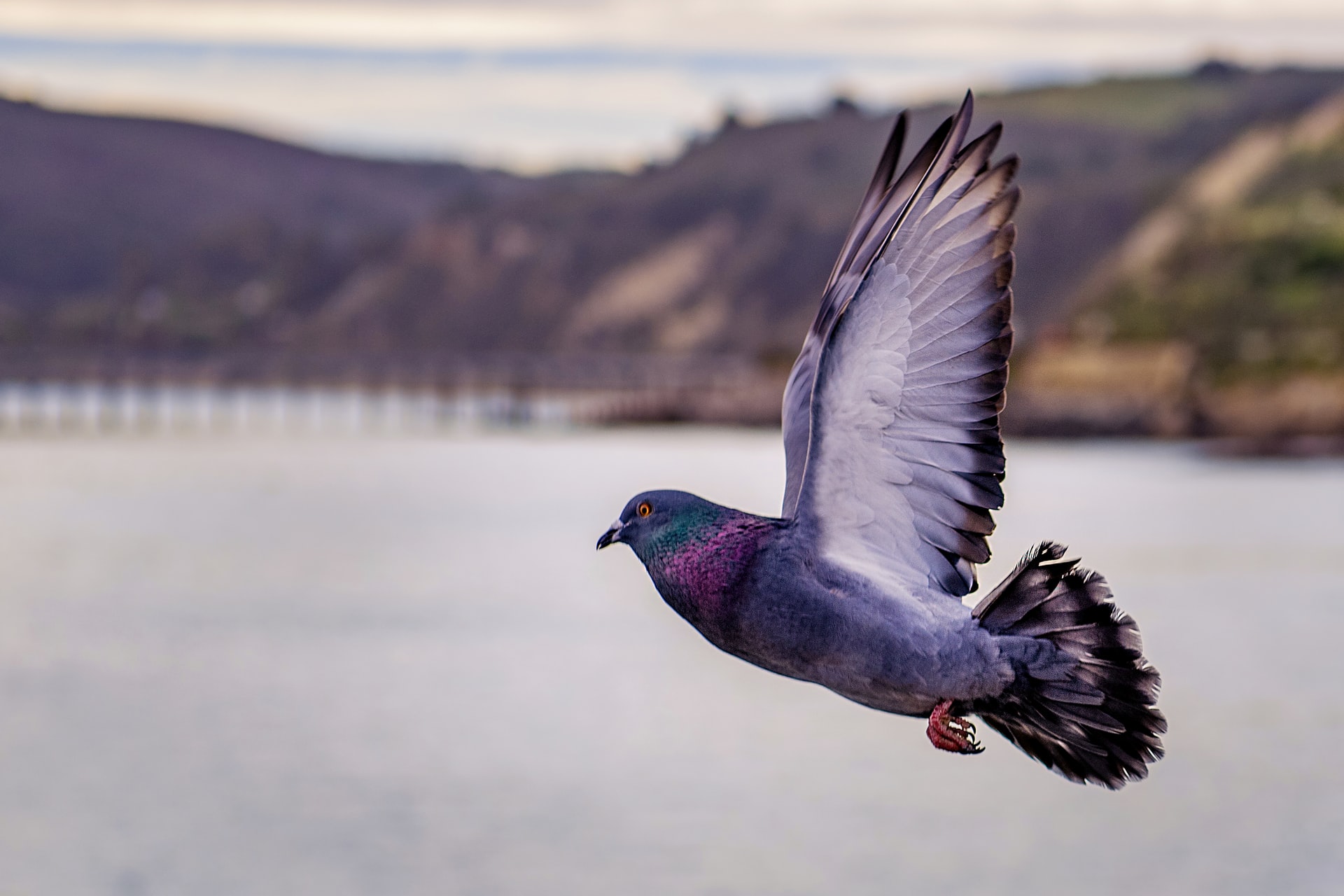 A pigeon taking flight. Photo by Tim Mossholder via Unsplash.

The rock pigeon, also known as the rock dove, is commonly found in suburban, urban, and agricultural environments around the world. These mild-mannered birds often have red or orange eyes, a short bill with an operculum (shown below), gray feathers, short legs, and a plump frame. 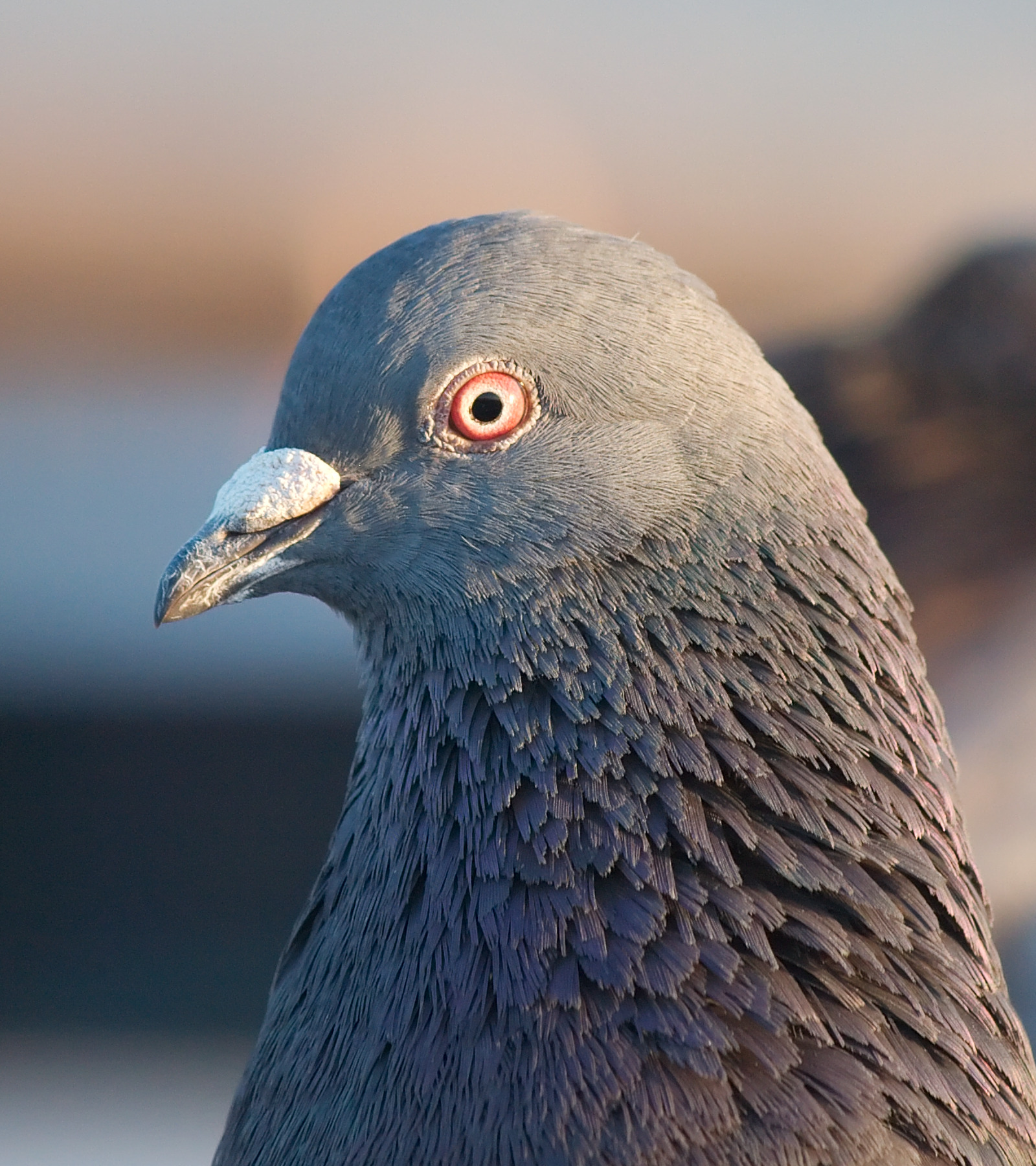 In this image, you can see a distinctive operculum (shown in white) on a rock pigeon’s bill. Image by Dori — Own work. Licensed under CC BY-SA 3.0 US via Wikimedia Commons.

At first glance, these pigeons look plain in color, but upon further inspection, their necks are decorated with iridescent green and purple feathers. Let’s take a closer look at what makes these feathers glitter and shine in the light.

A pigeon’s iridescent feathers are a tilted latticework of tiny threads of pigmented material. In the wild, light waves reflect off of these threads, interfering with each other in the process. During this interference, peaks of light waves can hit troughs or merge together. When peaks hit troughs, we cannot see green or purple hues on a pigeon, but when peaks merge, we can view intense shades of green and purple. These two effects work simultaneously, giving pigeons their iridescent glow.

This feathery phenomenon isn’t unique to rock pigeons alone. A wide variety of birds display this same eye-catching effect, such as mallards; hummingbirds; purple martins; and, of course, peacocks. In these birds, the effect is often more noticeable. But why is that?

For one, the latticework of pigeons’ feathers are usually less organized when compared to other birds with iridescent feathers, especially the birds of paradise.

In addition, in 2014, researchers looked into what might cause the degradation of iridescent feathers in birds, specifically feral pigeons. They found that pigeons with a higher bacterial load in their feathers had less iridescent feathers on their necks. To combat excess bacteria, pigeons perform a maintenance behavior called preening. 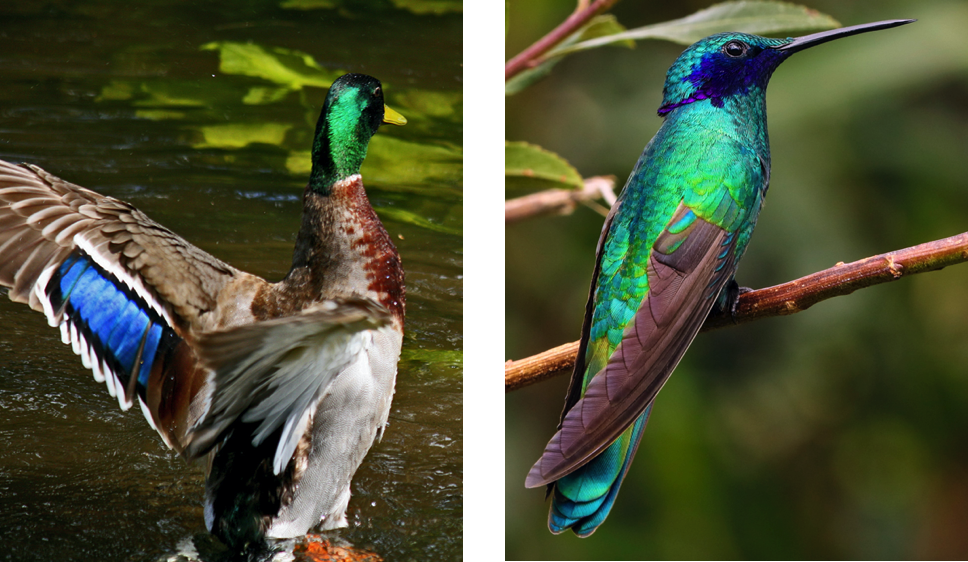 The iridescent feathers of a mallard (left) and hummingbird (right). Mallard image by Rror — Own work. Licensed under CC BY-SA 3.0 via Wikimedia Commons. Hummingbird image by Chris Charles via Unsplash.

Unlike pigeons, some birds have plumage, or a layer of feathers, that can absorb up to 99.95 perfect of the visible light that hits it. They use this ability to deepen the color of their black feathers and stand out.

When you think of dinosaurs, sharp teeth, short arms, and long tails may come to mind. Thanks to recent paleontology findings, there’s another trait you can add to that list: You guessed it — iridescent feathers.

In 2014, a farmer in northeastern China spotted the fossils of a yet-to-be-discovered, bird-like dinosaur on the slab of a rock. Remarkably, the fossils (feathers and all!) were in pristine shape, allowing an international team of researchers from Belgium, China, and the United States to analyze the remains. 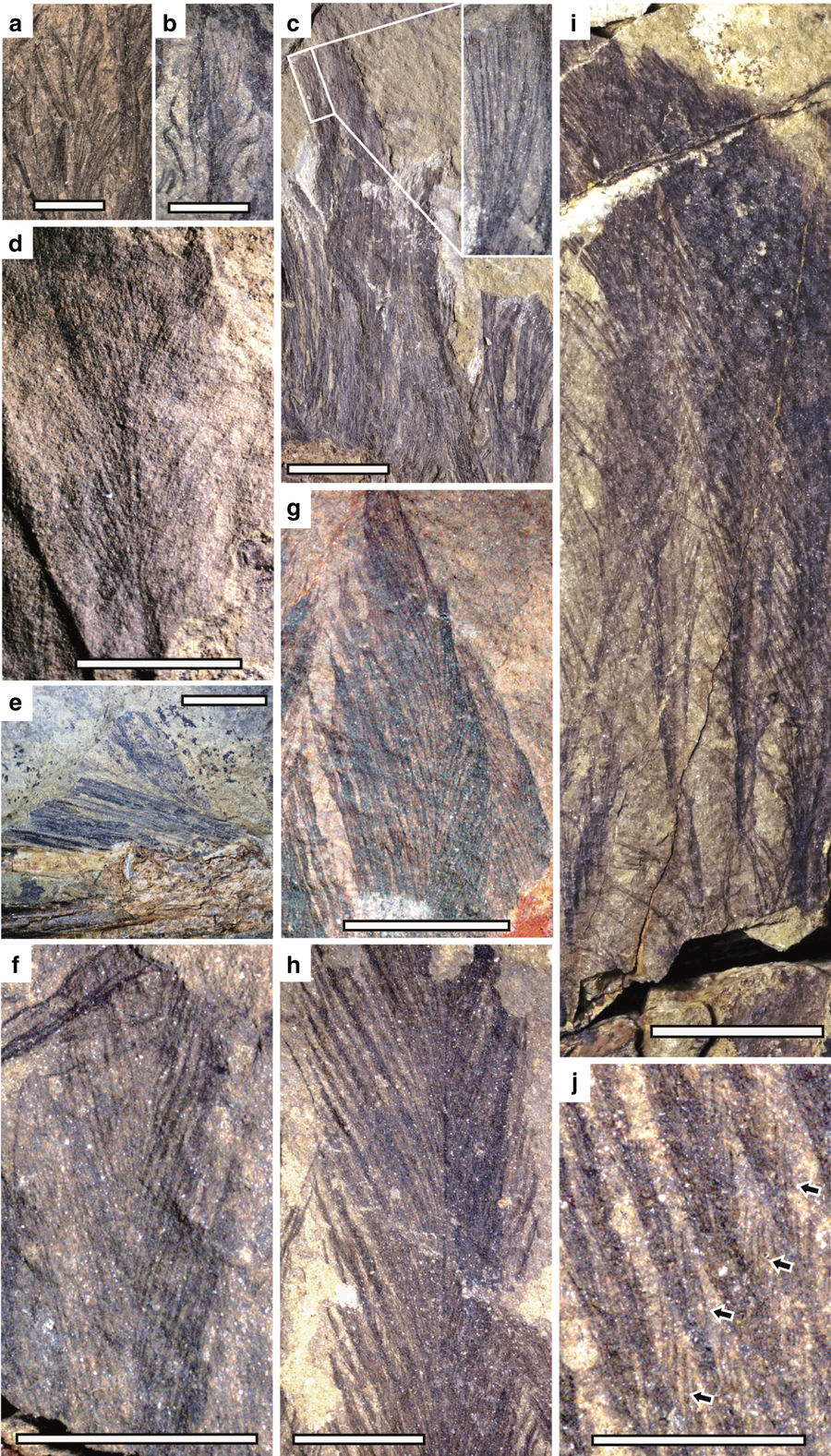 In their work, they determined the dinosaur to be of the theropod family, a diverse group of carnivorous dinosaurs with hollow bones and bird-like feet. However, unlike fellow theropod Tyrannosaurus rex, this dinosaur only weighed about 0.45 kg (1 lb) and was the size of a chicken.

Most notably, the team learned that this 161-million-year-old creature likely roamed Earth with a bony crest on its snout and iridescent feathers coating its head and neck. Such crests are typically found on dinosaurs of previous eras, while its shiny feathers may represent the first known occurrence of iridescence similar to that found in a variety of hummingbird species living today. Fittingly, the researchers named the new dinosaur Caihong juji, which means “rainbow with the big crest” in Mandarin.

Below, you can view a restoration of what the dinosaur might have looked like (without the crest). 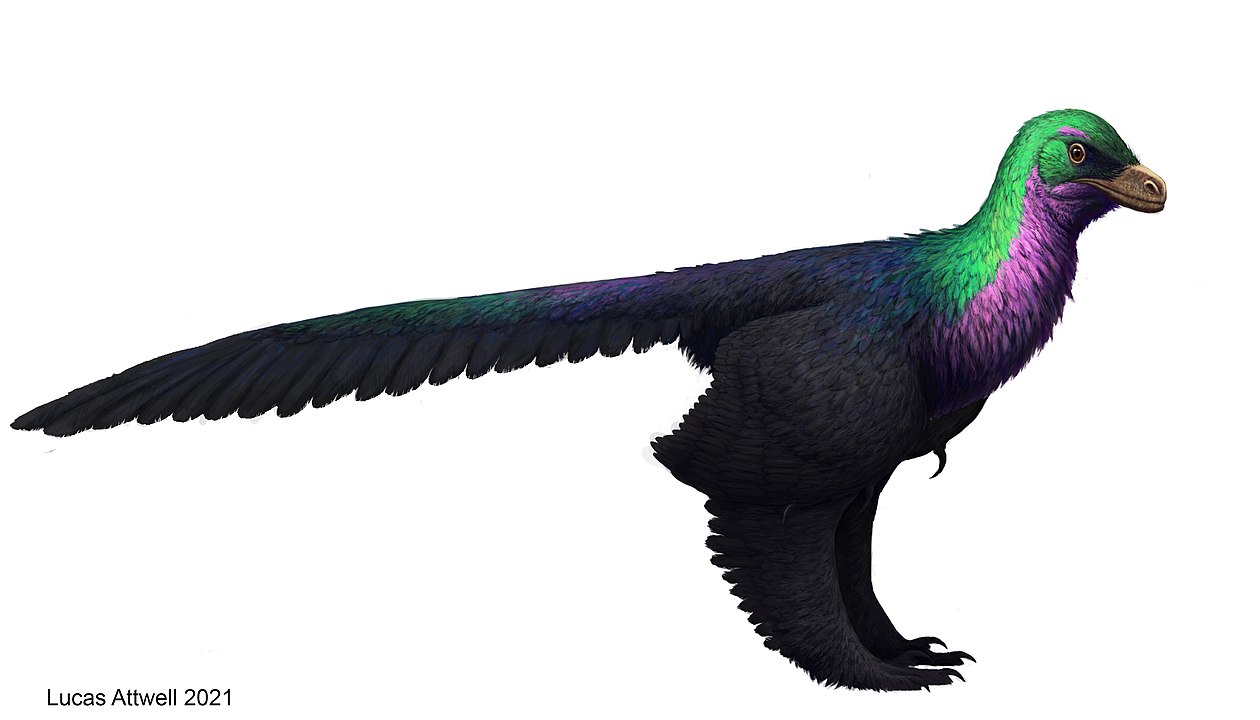 A life restoration of Caihong juji. Image by Lucas-Attwell — Own work. Licensed under CC BY-SA 4.0 via Wikimedia Commons.

From pigeons to prehistoric dinosaurs, iridescent feathers consistently pique the interest of many and make the world a whole lot brighter — and to that we say shine on.

Interested in learning about other strange and interesting phenomenon found in the animal kingdom? Check out these posts:

Hi
Nice blog,
just to comment that the color of many butterflies, as well as many insects rely on the same diffraction effect of micro-structures as the feathers presented here.
And for humankind applications, we have been using diffraction to model light for decades (before it was tedious to calculate, COMSOL is helping us a lot here), today these models helps us at CSEM SA to propose new embossing patterns for security features, and even to color chocolate !

Glad to hear you liked this blog post! And very interesting work! Thank you for sharing.