Modeling Linear Elastic Materials – How Difficult Can It Be?

The most fundamental material model for structural mechanics analysis is the linear elastic model. Trivial as it may sound, there are some important details that may not be obvious at first glance. In this blog post, we will dive deeper into the theory and application of this material model and give an overview of isotropy and anisotropy, allowable values for material data, incompressibility, and interaction with geometric nonlinearity.

In the vast majority of simulations involving linear elastic materials, we are dealing with an isotropic material that does not have any directional sensitivity. To describe such a material, only two independent material parameters are required. There are many possible ways to select these parameters, but some of them are more popular than others.

In the uniaxial test, Poisson’s ratio determines how much the material will shrink (or possibly expand) in the transverse direction. The allowable range is -1 <\nu< 0.5, where positive values indicate that the material shrinks in the thickness direction while being pulled. There are a few materials, called Auxetics, which have a negative Poisson’s ratio. A cork in a wine bottle has a Poisson’s ratio close to zero, so that its diameter is insensitive to whether it is pulled or pushed.

For many metals and alloys, \nu \approx1/3, and the shear modulus is then about 40% of Young’s modulus.

When \nu approaches 0.5, the material becomes incompressible. Such materials pose specific problems in an analysis, as we will discuss.

The bulk modulus, K, measures the change in volume for a given uniform pressure. Expressed in E and \nu, it can be written as:

When \nu= 1/3, the value of the bulk modulus equals the value of Young’s modulus, but for an incompressible material (\nu \to0.5), K tends to infinity.

The constant \mu is simply the shear modulus, while \lambda can be written as

A full table of conversions between the various elastic parameters can be found here.

will no longer exist, and must instead be replaced by a constraint stating that

Another way of looking at incompressibility is to note that the term (1-2\nu) appears in the denominator of the constitutive equations, so that a division by zero would occur if \nu= 0.5. Is it then a good idea to model an incompressible material approximately by setting \nu= 0.499?

It can be done, but in this case, a standard displacement based finite element formulation may give undesirable results. This is caused by a phenomenon called locking. Effects include:

Part of the settings for a linear elastic material with mixed formulation enabled.

When Poisson’s ratio is larger than about 0.45, or equivalently, the bulk modulus is more than one order of magnitude larger than the shear modulus, it is advisable to use a mixed formulation. An example of the effect is shown in the figure below. 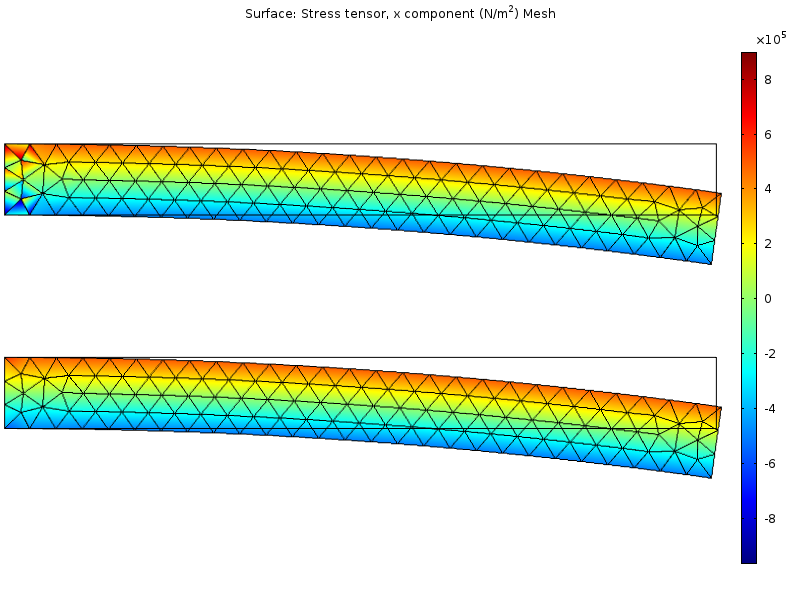 In the solution with only displacement degrees of freedom, the stress pattern shows distortions at the left end where there is a constraint. These distortions are almost completely removed by using a mixed formulation.

In general cases of linear elastic materials, the material properties have a directional sensitivity. The most general case is called anisotropic, which means all six stress components can depend on all six strain components. This requires 21 material parameters. Clearly, it is a demanding task to obtain all of this data. If the stress, \boldsymbol \sigma, and strain, \boldsymbol \varepsilon, are treated as vectors, they are related by the constitutive 6-by-6 symmetric matrix \mathbf D through

The constitutive relation of an orthotropic material is easier when written on compliance form, \boldsymbol \varepsilon= \mathbf C \boldsymbol \sigma:

Since the compliance matrix must be symmetric, the twelve constants used are reduced to nine through three symmetry relations of the type

Note that \nu_{\rm YX} \neq \nu_{\rm XY}, so when dealing with orthotropic data, it is important to make sure that the intended Poisson’s ratio values are used. The notation may not be the same in all sources.

Anisotropy and orthotropy commonly occur in inhomogeneous materials. Often, the properties are not measured, but computed using a homogenization process upscaling from microscopic to macroscopic scale. A discussion about such homogenization — in quite another context – can be found in this blog post.

When working with geometrically nonlinear problems, the meaning of “linear elasticity” is really a matter of convention. The issue here is that there are several possible representations of stresses and strains. For a discussion about different stress and strain measures, see this previous blog post.

Since the primary stress and strain quantities in COMSOL Multiphysics are Second Piola-Kirchhoff stress and Green-Lagrange strain, the natural interpretation of linear elasticity is that these quantities are linearly related to each other. Such a material is sometimes called a St. Venant material.

Intuitively, one could expect that “linear elasticity” means that there is a linear relation between force and displacement in a simple tensile test. This will not be the case, since both stresses and strains depend on the deformation. To see this, consider a bar with a square cross section. 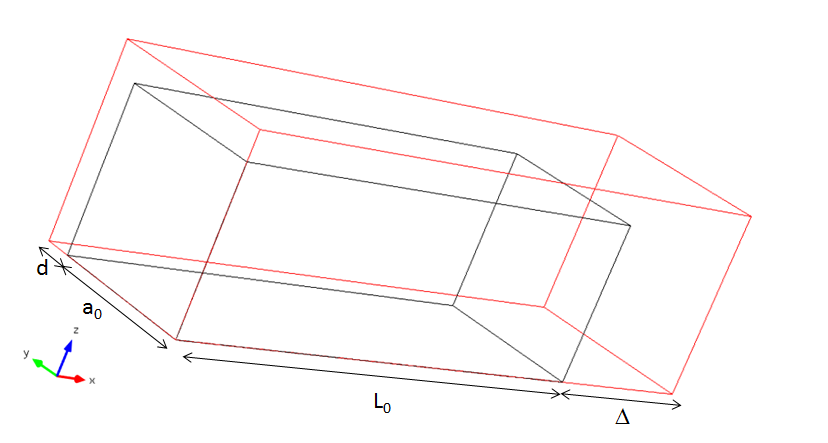 The bar subjected to uniform extension.

The original length of the bar is L_0 and the original cross-section area is A_0=a_0^2, where a_0 is the original edge of the cross section. Assume that the bar is extended at a distance \Delta so that the current length is L=L_0+\Delta=L_0(1+\xi).

The force can be expressed as the Cauchy stress \sigma_x in the axial direction multiplied by the current cross-section area:

To use the linear elastic relation, the Cauchy stress \boldsymbol \sigma must be expressed as the Second Piola-Kirchoff stress \mathbf S. The transformation rule is

where \mathbf F is the deformation gradient tensor, and the volume scale is defined as J = det(\mathbf F). Without going into details, for a uniaxial case

Since for a St. Venant material in uniaxial extension, the axial stress is related to the axial strain as S_X = E \epsilon_X, we obtain

the force versus displacement relation is then

The linear elastic material furbished with geometric nonlinearity actually implies a cubic relation between force and engineering strain (or force versus displacement, since \Delta =L_0\xi), as shown in the figure below. 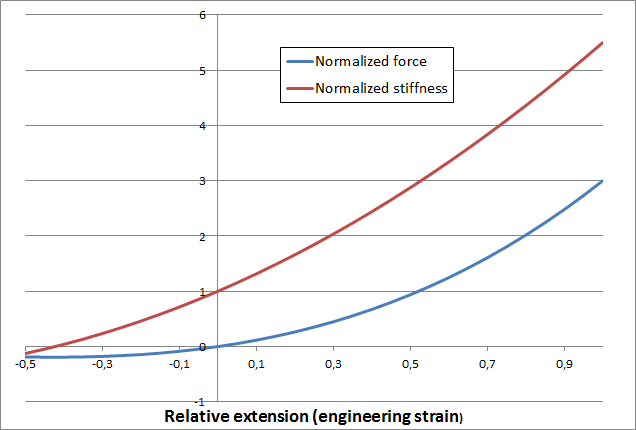 The uniaxial response of a linear elastic material under geometric nonlinearity.

As can be seen in the graph, the stiffness of the material approaches zero at the compression side, \xi = \sqrt{{1}/{3}}-1 \approx -0.42. In practice, this means that the simulation will fail at that strain level. It can be argued that there are no real materials that are linear at large strains, so this should not cause problems in practice. However, linear elastic materials are often used far outside the range of reasonable stresses for several reasons, such as:

In all of these cases, the solver may fail to find a solution if the compressive strains are large. If you suspect this to be the case, it is a good idea to plot the smallest principal strain. If it is smaller than -0.3 or so, we can expect this kind of breakdown. The critical value in terms of the Green-Lagrange strain is found to be -1/3. When this becomes a problem, you should consider changing to a suitable hyperelastic material model.

Compression may not be the only problem. In the analysis above, Poisson’s ratio did not enter the equations. So what happens with the cross section?

By definition in the uniaxial case, the transverse strain is related to the axial strain by

When these strains are Green-Lagrange strains, this is a nonlinear relation stating that

Thus, there is a strong nonlinearity in the change of the cross section. Solving this quadratic equation gives the following relation between the engineering strains

The result is shown in the figure below. 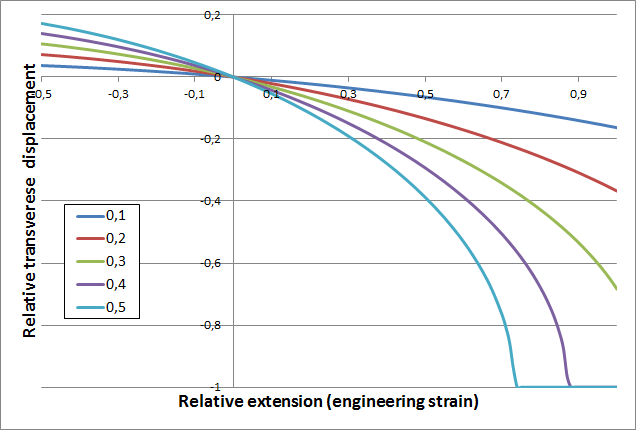 Transverse displacement as a function of the axial displacement for uniaxial tension of a St. Venant material. Five different values of Poisson’s ratio are shown.

As you can see, the cross section collapses quickly at large extensions for higher values of Poisson’s ratio.

If another choice of stress and strain representation had been made — for example, if the Cauchy stress were proportional to the logarithmic, or “true” strain — it would have resulted in quite a different response. Instead, such a material has a stiffness that decreases with elongation, where the force-displacement response does depend on the value of Poisson’s ratio. Still, both materials can correctly be called “linear elastic”, although the results computed with large strain elasticity can differ widely between two different simulation platforms.

We have illustrated some limits for the use of linear elastic materials. In particular, the possible pitfalls related to incompressibility and to the combination of linear elasticity with large strains have been highlighted.

If you are interested in reading more about material modeling in structural mechanics problems, check out these blog posts:

Editors note: From version 5.4, the settings for mixed formulations look different, since more options were added.

Thanks Henrik, for this blogpost.
Can you recommend some good literature for e.g. Geometric Nonlinearity, and where I can find some more about Cauchy and Piola-Kirchoff stresses

Here are a couple of good online resources:

There are many good books, one example is

I was wondering whether the relation for the compliance matrix for anisotropic materials should not instead be “nu_{yx}/E_y = nu_{xy}/E_x.”

Thanks for bringing this to our attention. The typo is fixed now.

How can one extract data to plot the results in a graph?