When simulation is used in the field of biomedicine, it helps biomedical engineers develop better devices faster and more cost efficiently. However, project stakeholders and regulatory bodies have been slow to adopt the benefits of simulation and accept it as a viable tool in medtech development. Engineers on the ASME V&V 40 subcommittee, some of whom spoke on a panel at COMSOL Day: Biomedical Devices, are helping to ramp up the adoption of simulation in this industry. They hope to help shape a future in which simulation is seen as a holistic part of biomedical development.

Why Add Simulation to the Biomedical Development Workflow?

There are many benefits to using simulation in biomedical development, but the primary motivator? The patients. Using simulation, engineers can design better and safer devices and treatment approaches for patients and determine which methods are safest for patients requiring a certain form of treatment.

A simulation of heat generated during a tumor ablation (left) and drug concentration in the human body over time (right).

Simulation can also help to determine if a treatment or device is causing unintended damage to a patient. Engineers can simulate interactions between energy and body tissue to determine whether devices like pacemakers and defibrillators are going to harm the patient during operation — in effect, doing more harm than good. A common example is the electromagnetic heat generated during magnetic resonance imaging (MRI), which could cause discomfort or even damage a patient’s tissue.

In addition to the primary goal of patient wellbeing, simulation also helps cut down on the amount of preclinical testing that needs to be done during the prototyping, development, and approval stages of a medical product’s life cycle. By decreasing the amount of testing needed, products can be brought to market faster.

A model of a biomedical stent (left) and pacemaker electrode (right).

Simulation can speed up the development of medical devices and processes across disciplines, including:

To save costs during the development cycle, simulation can be brought in to do some of the heavy lifting usually done by costly experimental testing and clinical trials. Optimized devices that are developed in a more cost-efficient manner could even lead to less costly treatments for the patient as well.

Let’s take a bird’s eye view of biomedical development: Simulation and experiments, when brought together, can help biomedical engineers fully understand how a device or process works. Examples include using simulation to understand:

“If you use models along with experience, both will be better,” says Arlen Ward during a panel at COMSOL Day: Biomedical Devices called “Simulation Software’s Remarkably Increased Role in Inventing, Developing, and Certifying Medical Device Designs”. The panel was moderated by Nagi Elabbasi of Veryst Engineering, a COMSOL Certified Consultant, and also included Ismail Guler of Boston Scientific, William Torres of Exponent, and Carlos Corrales from Baxter International, Inc. 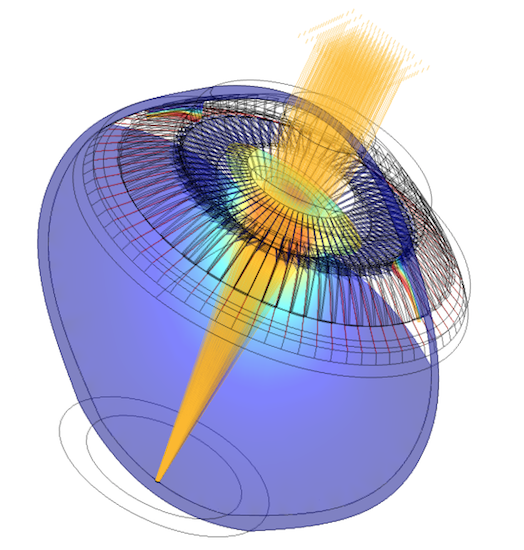 A parametric optomechanical model of the human eye can be used to understand eye disorders and aging. Image courtesy Kejako from the story “3D Parametric Full Eye Model Gives 20 Years of Better Vision“.

Besides being able to fully understand the devices and processes that already exist in the field of biomedicine, engineers can also use simulation for the innovation of completely new medtech products. “Simulation can be used in an exploratory capacity to develop new devices not thought possible,” says another COMSOL Day panelist, Carlos Corrales of Baxter International, Inc. He described how engineers can bring in simulation very early in the design process in order to determine if it’s even possible to think about something as a product.

A simulation of the electromagnetic field around an MRI birdcage coil (left) and EMI/EMC for an RFID tag for healthcare wearables (right). The COMSOL Multiphysics® software can be used to model many physical phenomena taking place in the human body and the devices used to treat it, including solid mechanics, fluid mechanics, heat transfer, electromagnetics, biotransport, drug delivery, acoustics, and any multiphysics phenomenon.

Although the use of simulation is steadily growing in this field, there is still plenty of room for increased adoption of these tools. But how?

The American Society of Mechanical Engineers (ASME) supports a group of engineers and scientists called V&V 40 subcommittee, who work to ensure that computational models used in the medical field have been adequately verified, validated, and analyzed through uncertainty quantification (UQ).

By adhering to a strict set of subcommittee guidelines, ASME V&V 40 has been able to foster wider acceptance of the validity of computational modeling for medical devices and processes throughout the field of biomedicine. In fact, two of the COMSOL Day panelists, Carlos Corrales, as well as Ismail Guler of Boston Scientific, currently sit on the V&V 40 subcommittee. 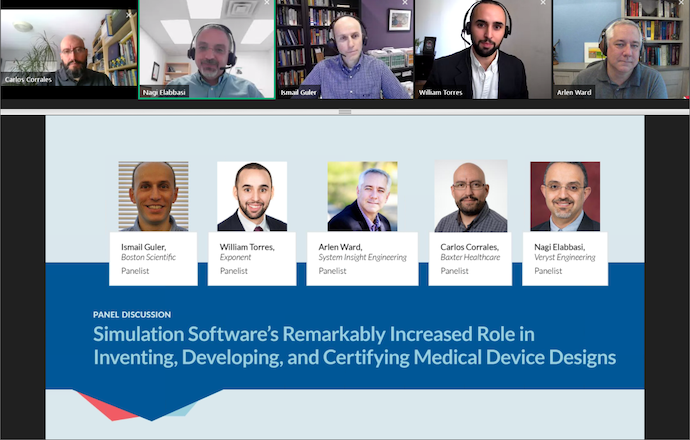 The panelists at COMSOL Day: Biomedical Devices, some of whom are involved with the ASME V&V 40.

Modeling as a Complement to Other Processes

It is important to note that simulation engineers in the biomedical field are not trying to completely replace experimental testing and clinical trials with simulation. In fact, simulation is meant to complement these other means of analysis. “As much as we need experiments, and we live and breathe by experiments, we would not have models without experiments. Our capabilities of experiments are limited,” says Corrales. Ward agrees, adding: “Use modeling along with experimental testing, and both will be better.”

Introducing Simulation as a Concept

One big challenge in getting medical professionals on board with the use of simulation is that they might not even be familiar with simulation to begin with. High-quality visualizations of simulation results, and specialized simulation apps that end users can interact with, are helping to demonstrate the benefits of simulation to regulatory bodies and other stakeholders.

These people might not fully understand the ins and outs of simulation, whether they are looking at a spreadsheet of data or a high-quality 3D visualization. “We need to improve how we explain modeling and simulation and the end-to-end process, and how we set up the model, solvers, and outputs,” says William Torres, fellow panelist. “Otherwise, you see stakeholders’ eyes glaze over.”

Simulation apps are an intuitive way to demonstrate the benefits of simulation to these stakeholders. They can be used by people who are not familiar with setting up computational models on their own. Consultants, doctors, surgeons, and other medical professionals can even use specialized apps to run their own analyses.

Learn more about developing and deploying apps, and see a biomedical app in action, in the video below:

In March 2020, the COVID-19 pandemic severely limited access to labs and testing facilities, rendering clinical trials and experiments nearly impossible to conduct. However, this challenge also spurred an opportunity: The lack of access to labs narrowed the amount of options available to biomedical engineers, increasing interest across the field in how modeling and simulation can be used in this field. 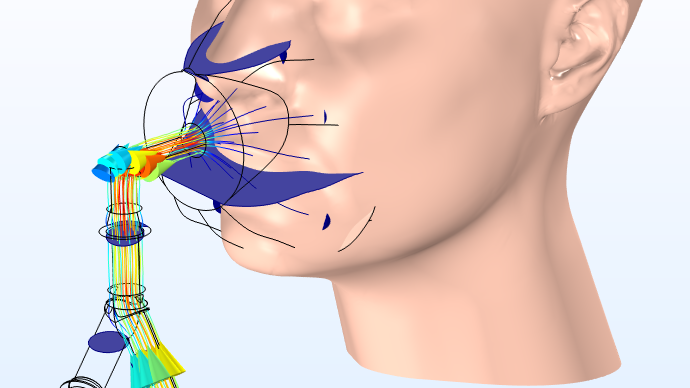 Where do we go from here?

The Next Generation of Biomedical Engineers

Engineers like the panelists from COMSOL Day: Biomedical Devices and committees like V&V 40 are ramping up the adoption of simulation in the biomedical industry. The Food and Drug Administration (FDA) and other regulatory bodies currently accept simulation results when granting approvals of biomedical devices and treatments. What comes next?

By introducing bioengineering students to simulation, we can create a long-term future in which simulation is regarded as a holistic part of the biomedical development process. “Students and young engineers need to have the ability to look at simulation as part of their methodology, not just a tool,” says Ward.

By bringing simulation into the education of bioengineering students, we can ensure that this holistic approach to biomedical development leads to a brighter and brighter future for the world of biomedicine.