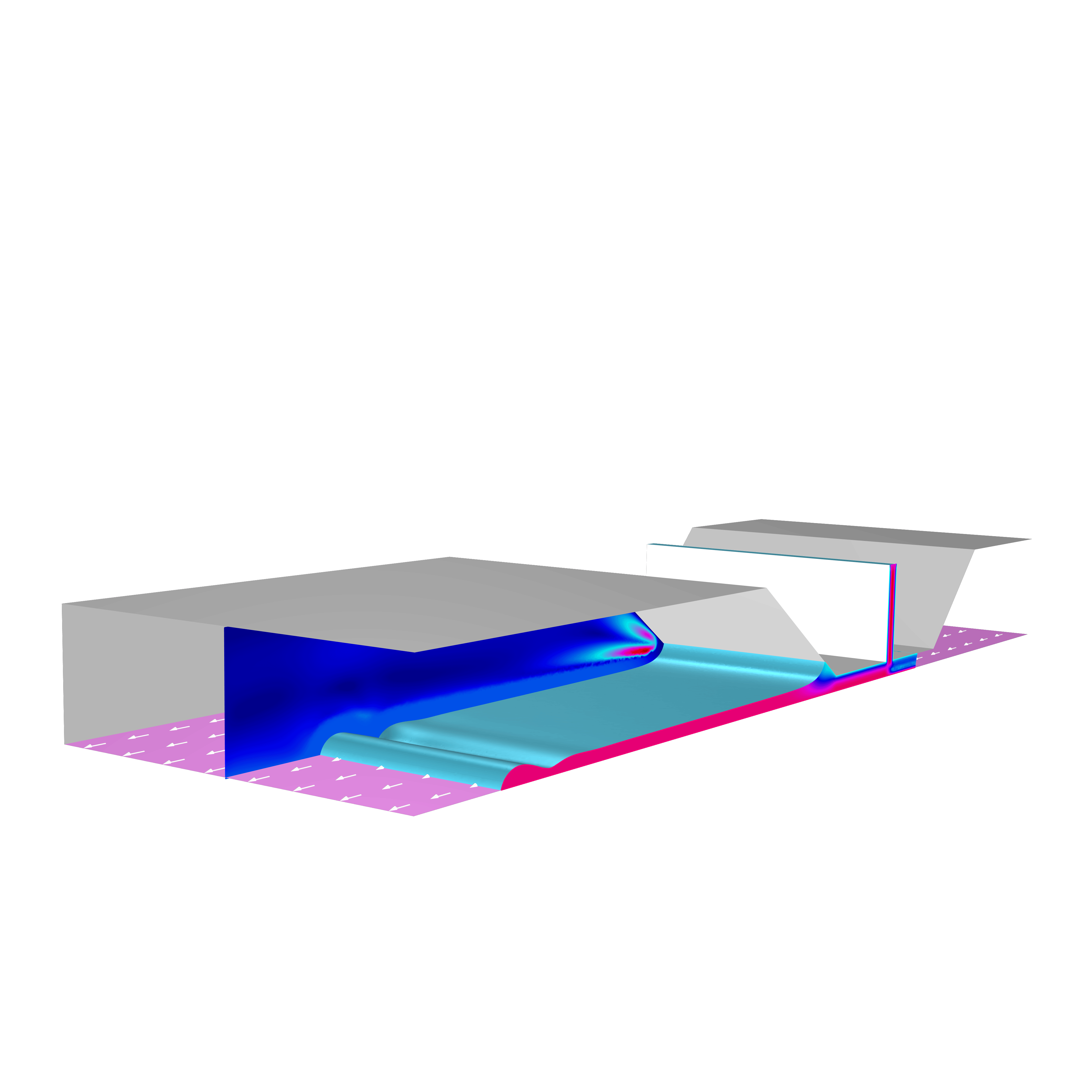 Modeling Software for Single and Multiphase Flows in Non-Newtonian Fluids

The Polymer Flow Module is an add-on to COMSOL Multiphysics that is used for defining and solving problems involving non-Newtonian fluids with viscoelastic, thixotropic, shear thickening, or shear thinning properties. You can account for the properties of the fluids as a function of temperature and composition to model cure and polymerization. In combination with other modules in COMSOL Multiphysics, you can also model fully coupled and time-dependent fluid-structure interactions.

What You Can Model with the Polymer Flow Module

Non-Newtonian fluids are found in a great variety of processes in the polymer, food, pharmaceutical, cosmetics, household, and fine chemicals industries. Examples of these fluids are coatings, paints, yogurt, ketchup, colloidal suspensions, aqueous suspensions of drugs, lotions, creams, shampoo, suspensions of peptides and proteins, to mention a few. Modeling and simulation can be used to design and optimize processes where these fluids are involved, ensuring high-quality products for the end user.

Viscoelastic fluid models account for the elasticity in these types of fluids. As the fluid is deformed, there is a certain amount of force that works toward returning the fluid to its undeformed state. Important aspects of modeling are to estimate the deformation of the fluid with time, that is the shape of the air–liquid interface, the local forces on the surfaces that may interact with these fluids, and the pressure losses in a system where the fluid flow occurs. Typical examples of these fluids are polymer melts, paints, and suspensions of proteins.

Benchmark model for the thinning of a viscoelastic filament under the action of surface tension. The filament forms a beads-on-a-string structure with almost spherical drops connected by exponentially thinning threads. The plot shows the flow velocity as the fluid beads are formed.

Colloidal suspensions may exhibit shear thickening behavior, where viscosity increases substantially with shear rate. Other suspensions may be shear thinning, for example syrups and ketchup, where the viscosity decreases with shear rate. Thixotropic fluids also have a time dependency, where the viscosity decreases with the duration of the shear rate. The models describing these fluids are all inelastic, but they describe highly non-Newtonian behavior. The purpose of modeling and simulation is similar to that for viscoelastic fluids above: estimate the shape of the air–liquid interface, the local forces on the surfaces that may interact with these fluids, and the pressure losses in a system where the fluid flow occurs. Additionally, the dependency on temperature and composition may be important for the design of manufacturing processes, for example, with the curing of rubber melts.

Mold filling of a molten rubber solution. The model uses the Power Law to describe the behavior of the rubber melt and Newtonian flow for the air flow out of the mold. The phase field method is used to track the interface between phases.

Features and Functionality in the Polymer Flow Module

The Polymer Flow Module features a variety of viscoelastic fluid models. These models differ in the constitutive relations describing the deformation and the forces caused by the fluid's deformation. The Oldroyd-B model uses a linear relation, which can be described as a suspension of Hookean springs in a Newtonian solvent, while the others describe nonlinear elastic effects and shear thinning.

In addition to the viscoelastic models, the Polymer Flow Module features a wide range of inelastic non-Newtonian models. Many of the models are generic, used to describe shear thinning and shear thickening. For more specific applications, there are models for viscoplastic and thixotropic fluids.

Colloidal suspension modeled with the Power Law model. The viscosity increases dramatically away from the impeller yielding very poor mixing higher up in the mixer. The model shows that a second impeller closer to the liquid surface may be required.

Solidification of a rubber melt in a mold. The curing properties and the curing process are described using thermal functions.

A common method of polymer extrusion and mold filling is to melt the rubber or polymer mixture. The mixture is then allowed to cure inside the mold. The Polymer Flow Module includes the thermal models required to model these processes: the Arrhenius, Williams–Landel–Ferry, and Exponential models are all available.

Every business and every simulation need is different. In order to fully evaluate whether or not the COMSOL Multiphysics® software will meet your requirements, you need to contact us. By talking to one of our sales representatives, you will get personalized recommendations and fully documented examples to help you get the most out of your evaluation and guide you to choose the best license option to suit your needs.

Just click on the "Contact COMSOL" button, fill in your contact details and any specific comments or questions, and submit. You will receive a response from a sales representative within one business day.